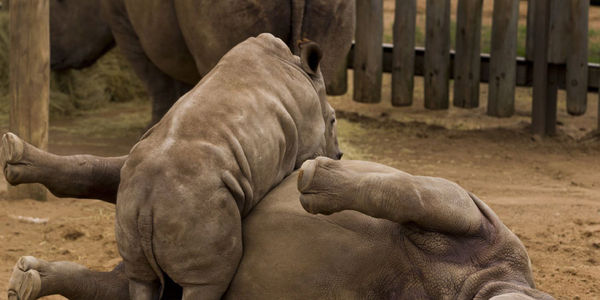 THERE ARE TWO DIFFENT LINKS TO LEAVE YOUR THOUGHTS ON IN THE PETITION.  THE SECOND ONE IS AT THE END OF THE PETITION.  PLEASE BE SURE TO LEAVE A COMMENT ON BOTH SO THEY HAVE AN INCREDIBLE CHANCE OF BEING ADDED.  THANX, PLEASE SHARE WITH YOUR FRIENDS.

HERE IS ONE OF THE LINKS:

THERE ARE MANY PETITIONS ON THIS SITE TO SIGN

I ABSOLUTELY LOVE LOVE THIS PIX OF BABY PLAYING WITH MOM.

THESE ARE WHITE RHINOS

''All species listed under CITES Appendix 1 enjoy the special protection of a critically endangered species. Currently, the Southern White Rhino is listed as Appendix 2 (in SA and Swaziland), which means that it is not classified as critically endangered. We want to change that by imploring CITES to list this specific subspecies as Appendix 1, in order to give the Southern White Rhino maximum protection under the law. A big part of this project is to URGENTLY appeal to the USFWS to include this rhino as part of their species proposal to be submitted to CITES''

THIS IS THE LINK TO LEAVE A COMMENT FOR THEM TO INCLUDE THE WHITE RHINO IN THE PROPOSAL PRESENTED TO CITIES.

PLEASE BE SURE TO CONTACT THE ABOVE LINK TO LEAVE YOUR THOUGHTS THERE.

THIS IS WHY THEY ARE INCREDIBLY NEEDED IN A HEALTHY ECO-SYSTEM.

The white rhinoceros is the largest and most social of the five rhinoceros species. It is one of the world’s biggest land animals, second only to the African and Asian elephant.
We don’t usually think of herbivores as keystone species or apex predators, who can keep entire ecosystems in check and aren’t themselves subject to predation. But given their size, mature “megaherbivores” like white rhinos aren’t usually subject to predation either(similar to lions or wolves).
According to new research published in the Journal of Ecology, Africa’s white rhinos could be thought of as apex consumers.
Researchers are increasingly realizing that the removal of megaherbivores from their ecosystems can have devastating impacts.

White rhinos are the only grazer of all rhino species, feeding almost exclusively on short grasses.
If White rhinos are driven to extinction, what will that mean for the African savannah?
In the African grassland, short grass cover is a useful metric for botanical heterogeneity. The more short grass lawns, the more diverse the landscape. Grazers increase biodiversity, by selectively eating certain kinds of plants over others.
When rhinos are protected, many other species are too; not only mammals but also birds, reptiles, fish and insects as well as plants.

“Not only is rhino poaching threatening the species conservation status, but also the potentially key role of this apex consumer for savanna ecosystem dynamics and functioning.” – Jason G. Goldman | 19 February 2014

By extending ESA protection to the white rhino — the last remaining unprotected species of rhinoceros — USFWS will closing a loophole that has been exploited by unscrupulous poachers and traffickers seeking to cash in on global demand for rhino horn.

THIS IS ANOTHER LINK TO LEAVE YOUR COMMENT ABOUT THE SOUTHERN WHITE RHINO.

THIS IS WHAT YOU CAN SAY:
Please extend ESA protection to the white rhino!