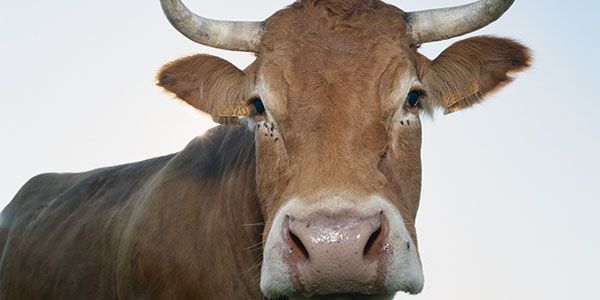 The famous German sociologist, Theodor Adorno, once said that 'Auschwitz begins wherever someone looks at a slaughterhouse and thinks: they're only animals'. Theodor's famous quote has been ridiculed for decades, but Theodor knew something that to this day no one wants to admit; Auschwitz was a Nazi death camp that was inspired by a very famous slaughterhouse.

This famous slaughterhouse was the Union Stock Yards of Chicago. It was here that the first production line mass killings of innocent beings took place.  The famous aerial view of the Union Stock Yards looks very similiar to the aerial veiw of Auschwitz. Every day for decades, tens of thousands of cattle and hogs arrived by rail through the famous Union Stock Yards Gate.  Within hours they had been slaughtered and processed. The slaughtering had to take place at lightening speed.  'Downers', that is cattle or hogs that were injured, sick, or heavily pregnant were separated from the herd and slaughtered later, because nothing was allowed to slow down the frantic production line killings.

The Nazis knew about the famous Union Stock Yards. Therefore it came as no surpirse that their victims would be slaughtered in a frantic production line method too.  The author of The Lives Of Animals, Elizabeth Costello stated; "Chicago showed us the way; it was from the Chicago stockyards that the Nazis learned how to process bodies'.  Auschwitz was nothing more than a human slaughterhouse. Victims arrived through the famous arched gate in cattle wagons.  All were processed at lightening speed like cattle, and driven to the gas chambers and killed. 10,000 people a day could be gassed and disposed of at Auschwitz.

The tragedy is that Europe learned nothing from Auschwitz. Theodor Adorno warned Europe before his death that a mass consumer and a materialistic society that has reduced livestock to nothing more than cargo will be a disaster for humanity.  Europe never heeded his warning.

After the European Union was formed, a treaty was signed that allowed the free movement of all livestock across all member states.  Every day millions of cattle, hogs, poultry and sheep are transported not only across the European Union, but further a field to Turkey, Iraq, North Africa, Russia, and The Middle East.  The starting point of this cruel journey can be anywhere in the European Union.

The animal welfare charity Compassion In World Farming followed and filmed various animal transports across the European Union and beyond.  British cattle and sheep from central England took many hours, without food and water just to reach the ferry point that would take them to mainland Europe.  Once in France it was days before they reached the German border. From Germany they were on the road for another day or two before reaching Italy.  From here they were driven for another week before reaching their final destination in Southern Italy.

Not once were the cattle or sheep fed or watered.  By law all livestock transports must be fed and watered every ten hours. Other transports of cattle and sheep that left Ireland and Poland revealed shocking cruelty and neglect.  Cattle were beaten, stabbed, and kicked onto lorries and ferries. All transports were held up by traffic or at the various borders they intended to cross. Irish cattle and sheep were kept waiting at the ferry harbours in Libya for another few days before being driven to the various slaughterhouses across the country.

The slaughterhouses of North Africa, Turkey, and Iraq need no introduction for their medieval and sadistic method of slaughtering livestock.  Cattle and sheep from the European Union were beaten savagely, hinds slashed, eyes gouged out, and tendons slashed. It was a very brutal and tragic end to a journey that was the cruelest journey on earth.  Exhausted cattle and sheep, desperately thirsty and hungry met a fate worse than death.

I beg all of you who will sign this petition to also contact Mr Tonio Borg and ask him why these acts of evil are still being committed in Europe.  This is the address for the European Commission's website  http://ec.europa.eu/commission_2010-2014/borg/index_en.htm