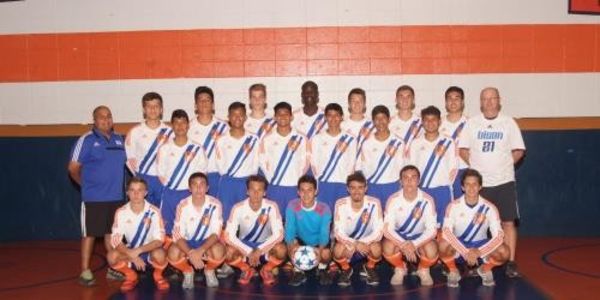 Fenton HS administration removed Coach Alvarez from his IT position, but, for no known reason, they also removed him from his head coaching position for boys soccer. One should have absolutely nothing to do with the other and Alvarez has had nothing but success and outstanding evaluations as the soccer coach.

David Alvarez has meant a tremendous amount to countless young men at Fenton.
Alvarez has taken a program that was a laughing stock and built it in to a formidable power in the conference and the region. More importantly, he has given countless kids hope and something to look forward to other than hanging around and getting into trouble. Over the years he has helped many boys get into college that might otherwise never have considered it. He holds his boys accountable and makes them work on success in the classroom before he allows them to work on success on the field. He has coordinated his boys to pack 60,000 meals in the fieldhouse to be sent to the hungry in Haiti and Liberia. He keeps the kids playing soccer throughout the summer by running TWO teams in a competitive summer league for which Alvarez volunteers 100% of his time. Alvarez serves as a Hispanic role model for all the Hispanic young men at Fenton. Now the boys are in the middle of the summer league and their leader has been taken away.

We urge the Board of Education to do the right thing and keep David Alvarez in his position as head Boys Soccer Coach at Fenton High School.

Dear Board of Education,

We feel that Coach Alvarez was fired as a coach without cause, without proper procedure, and as an afterthought to his dismissal as an IT professional at Fenton.

We feel that Coach Alvarez has served as a positive role model for us all -- in particular, the Hispanic community.  He has helped to build the character of countless young men, help many strive for college, held them accountable for their grades, guided them toward becoming confident and respectful young men, and involved them in giving back to the community through volunteer efforts.

If Fenton really is about the students, then we, the students of Fenton, are informing you that we want Coach Alvarez to remain as the head of the program to allow him to continue his positive impact on the lives of young men from Bensenville and Wood Dale.