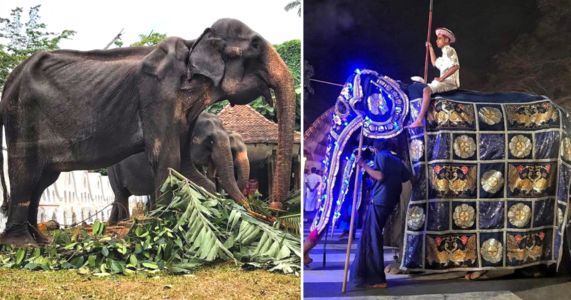 The cruelty that Tikiri the 70 year old, sick, emaciated and frail Sri Lankan elephant has been exposed to by forcing her to participate in the country's most spectacular and famed annual Buddhist pageant has been condemned not only by shocked and saddened Sri Lankans, but also those across the globe. The elephant's owner has admitted that the elephant has been ailing. Despite her advanced age and weak physical condition, Tikiri was made to parade the streets in chains, on several nights, heavily decked in ornate, illuminated attire which camouflaged her emaciated body. But, due to mass protests, Tikiri's participation at the pageant was withdrawn. BUT IS THAT ENOUGH? The answer is a resounding "NO." All those responsible for this cruelty must also be held accountable.

CRUELTY
In terms of Sri Lanka's Prevention of Cruelty to Animals Ordinance of 1907 the following are punishable offences:
• By any act or omission causing unnecessary pain or suffering to       any animal
• Abusing an animal
• Using in any work or labour any animal which by reason of any       disease, infirmity, wound, sore, or other cause is unfit to be so       used, or permits any such unfit animal in his possession or under     his control to be so used

WELFARE OF CAPTIVE ELEPHANTS
Sri Lanka has no Regulations to ensure the welfare of captive elephants such as Tikiri, in private ownership There have been numerous reports of the neglect, cruelty, abuse and exploitation that these elephants suffer at the hands of some private owners. Through a court case, the Animal Welfare Trust in Sri Lanka succeeded in motivating the Ministry of Wildlife Conservation to formulate Regulations for the welfare of captive elephants. These Regulations were formulated in consultation with the Attorney General's Department, the Department of Wildlife Conservation and independent elephant experts and animal welfare advocates. Though approved by the Cabinet of Ministers on 22nd November 2016, these Regulations still remain unenforceable as the required step of publishing them in the Gazette to give them the force of law is still pending. These Regulations lay down the duties and responsibilities of elephant owners. Bringing these Regulations into force will act as a deterrent to those who subject elephants in their charge to cruelty, neglect, abuse and exploitation for commercial gain or otherwise.