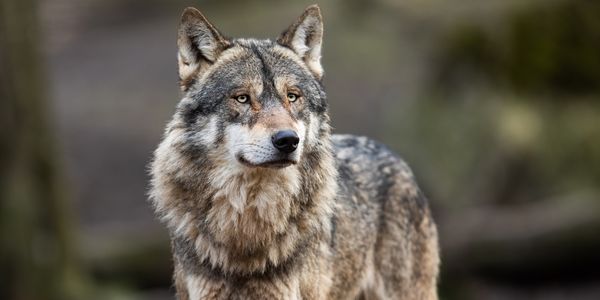 This Wolf Pack Was Already Tiny And the U.S. Government Just Murdered One of Them

Wolves and humans have been historically at odds in the United States -- so much so that the northern gray wolf was basically hunted to the brink of extinction in the continental states. The wolf's role in North America's ecology is key -- they keep prey populations like deer in check while redistributing nutrients through hunting and movement patterns. Plus, they provide some of the only sources of food for scavengers that do not or cannot hunt. It's impossible to know the extent of the web of life that originates with wolves, but one thing is for sure -- we need them.

So it's pretty miraculous that, against all odds, gray wolf populations have begun to bounce back. That being said, they are nowhere near stable and still require a great deal of support from scientists, conservationists, and activists. That's why it's so heartbreaking that the Washington Department of Fish and Wildlife (WDFW), a government agency tasked with the stewardship of these wild wolves, decided to gun one down in cold blood -- leaving her two family members alone.

There are so many ways to maintain balance between wolves, people, and other animals, and lethal methods are not only brutal -- they have proven to be ineffective in the long run! Sign the petition if you want to demand that the WDFW stop killing wolves!

This poor female wolf was just being an animal. When reports came in that her pack had attacked livestock in the area where they roam, the WDFW put out a hit on one of the wolves. That's right, not a specific wolf -- any of them would do. There's no way to tell which of the wolves attacked the livestock, but the WDFW doesn't really care about that. All they care about is making a big show to ranchers, whose power and pockets control much of the politics of these areas, that they are doing "something." It's a lot cheaper to kill a single wolf, who may not have even committed the trespass, than to invest in long-term, humane, and more effective solutions to interactions between wolves, livestock, and humans. Employing livestock managers, installing sound and light wolf deterrents, and assessing locations and arrangements of certain grazing locations should all be done long before lethal methods are even considered.

Wolf territory is quickly disappearing as lands are deforested and taken over for grazing -- the monetary interest of ranchers over the health and safety of wildness has always been the order of U.S. priorities. These poor wolves were left with only three family members when the WDFW slaughtered the rest of their pack in 2012. Unable to hunt as widely or as effectively as a normal sized pack, it's no wonder that they would roam into human developed areas.

This is a human problem, not a wolf problem. But the WDFW would rather frame it in the opposite way. By taking the lazy, cheap, and quick approach of killing one random wolf every time livestock are attacked, this agency is putting both wolves AND livestock in peril! For the good of all of these animals and humans too, the WDFW needs to invest in non-lethal, long-term solutions in wolf management.

Sign the petition to urge the WDFW to commit to stop killing wolves, and instead invest in their future!

Care2
This Wolf Pack Was Already Tiny And the U.S. Government Just Murdered One of Them
SHARETWEET