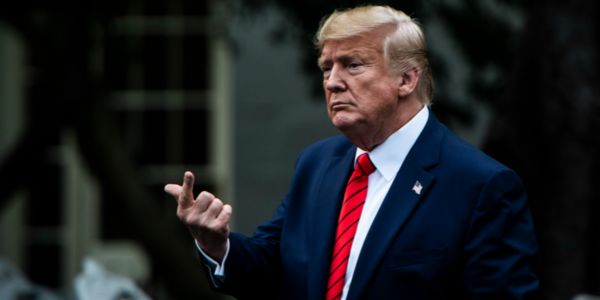 Protect the whistleblower and hold Trump accountable for threatening his safety

President Trump's highly illegal scheme to enlist Ukraine in his 2020 reelection efforts has rocked Washington to its core.

The whistleblower complaint is a damning, detailed account of Trump's scandalous behavior. Rather than deny the accusations against him, Trump has turned his vitriolic ire toward the patriots who put their country first in exposing his heinous actions.

What is shocking, however, is our bully-in-chief's incredulous impulse to threaten the personal safety of the whistleblower and his/her unidentified sources. Speaking to a cadre of U.S. diplomatic officials in New York, Trump referred to the aforementioned sources as spies, blurting out, "You know what we used to do in the old days when we were smart? Right? The spies and treason, we used to handle it a little differently than we do now."

The President of the United States is now openly and recklessly suggesting we execute government officials for daring to report or "leak" his immoral and illegal behavior. And he didn't stop there.

He later tweeted a demand that the whistleblower come forward and warned that there would be "big consequences." This direct threat is a clear violation of the Whistleblower Protection Act, an impeachable crime on its own.

As CNN reports, "The extraordinary spectacle of the President threatening a potential witness... cuts against the principle that whistleblowers deserve anonymity and protection, representing another dark twist in an administration that has constantly tested the boundaries of political propriety."

Demand Congress take every measure to protect the identity and safety of whistleblowers and hold President Trump personally accountable for his threats against them.

This behavior is far beyond the pale, and we must send a resounding message of assurance to present and future whistleblowers that America will always have their backs.