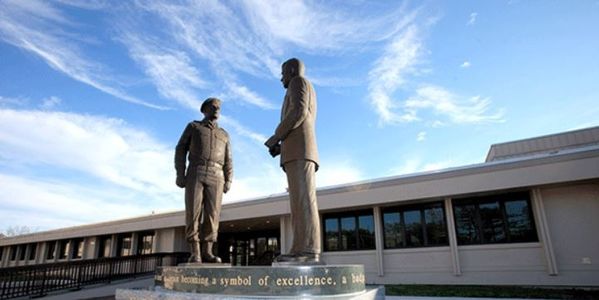 Known as the quiet professionals, the green berets have been "Freeing The Oppressed" all over the world, for decades. Their extraordinary contributions in Vietnam alone, serve to remind us of their uniqueness as the ONLY presidentially appointed unit. Now, the Special Forces' legacy is desperately calling upon us to free it from oppression.

Since its 1962 opening under MG Yarborough's command, the museum for Special Forces has served as more than a place of education. It has been a remarkable recruiting tool, where soldiers from other units have been inspired and often chose to join their ranks. It has also been a place of research, and perhaps more significantly, a place of solace for many returning Special Forces warriors.

In 2005, the museum's mission expanded to include the Psychological Warfare (PSYOP) and Civil Affairs units, also deserving of recognition for their quiet military contributions. With the underhanded and deceitful closing of the John F. Kennedy Special Warfare Museum on Fort Bragg, all those quiet voices suddenly became mute, forever. The grass roots units that distinctively support the US Armed Forces no longer have a home to remind us of their inimitable service.

The special nature of this particular museum has provided a sort of repatriation as well as an historical bridge between generations. In almost six decades since its opening, four generations of fathers have used the museum to share their past with their sons and daughters.

In the museum, many Vietnam Vets found a place where they felt free to talk about their military experiences. The items on display gave them a way to gently revisit long repressed memories without personalizing them or simply "telling war stories". In turn, this helped heal families through a better understanding of their soldier's difficult past.

In a prior era, before post traumatic syndrome was recognized as a serious health issue, the museum served as a substitute therapist for those who received little or no mental health support, after returning from their tours. Since Vietnam, many vets continued to benefit from the subtle psychological support that inhabited the displays of the museum. In the words of a frequent visitor, "The museum was a place where soldiers could feel whole and their past missions understood, without judgment".

This museum was much more than just a collection of historical military artifacts. It gave a voice to those who were reluctant to talk about their past. It recognized those who otherwise went unnoticed for their years of silent, professional service. It also paid proper tribute to those special soldiers who quietly lost their lives in the name of freedom.

The John F. Kennedy Special Warfare Museum was home to many one-of-a-kind items found nowhere else. The collection included a number of special OSS weapons and scuba/diving gear. There was even a large piece of the Berlin Wall, effects from the legendary POW survivor Nick Rowe, displays of the famous Son Tay Raid, and the first articles retrieved from Afghanistan post 9-11.

The new planned "path" for the items formerly under the museum's professional care, will have all those historical treasures scattered around the Fort Bragg campus, in restricted areas where only properly credentialed individuals will be able to view them. Their historical context and value will be completely lost, as they become mere decorations and wall hangings throughout various buildings.

It is unfathomable to think that anyone would be able to surreptitiously erase history with the stroke of a pen, ripping the fabric of the Special Warfare legacy and divesting its historic jewels into oblivion. It is equally incomprehensible, after investing over $1M to renovate a building in honor of the Special Forces, Civil Affairs and PSYOP units, to plan its demolition, just a few years later. More importantly, it is callously cruel to rob all those quiet professionals and their families of their remarkable heritage.