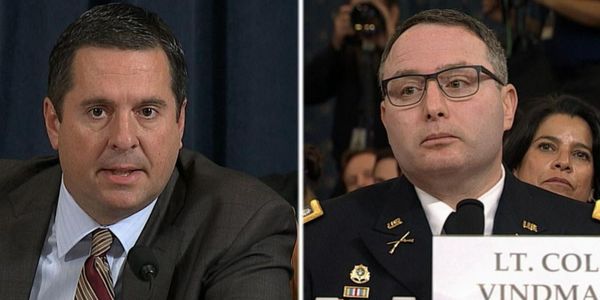 Demand Devin Nunes apologize to Lt. Col. Vindman for disrespecting him in hearing

On November 19th, during public testimony in the impeachment inquiry of President Trump, GOP Rep. Devin Nunes deliberately and callously insulted Lt. Col. Alexander Vindman of the US Army on national television.

Vindman, a decorated war hero and senior national security expert, appeared before the House Intelligence Committee in full army dress, as required by military rules when called to testify before Congress. During direct questioning, Rep. Nunes addressed the witness as "Mr. Vindman" while attempting to undercut his reputation and politicize his role in the exploding Ukraine scandal. Lt. Col. Vindman, already the subject of a concerted GOP smear campaign by partisan hacks, politely corrected Nunes, requesting that he be acknowledged by his rank.

Nunes capitulated, but offered no apology for the slight.

We hear a lot of empty rhetoric from the GOP about "supporting the troops." It's a fond chorus they love to sing at political rallies, in front of cable news cameras, in church pews across America. It's curious, then, that Nunes chose to belittle Vindman during live testimony. It smacks of desperation in the flailing defense of President Trump, and it reveals a craven truth about today's Republican party – support for our troops is conditional upon fealty. Woe to the man who dares to stand for truth in defiance of their political agenda.

Demand that Rep. Nunes publicly and formally apologize to Lt. Col. Vindman and the US Armed Forces as a whole. This deliberate attempt to besmirch a war hero for political gain cannot go unpunished. We must demand more from our elected representatives.