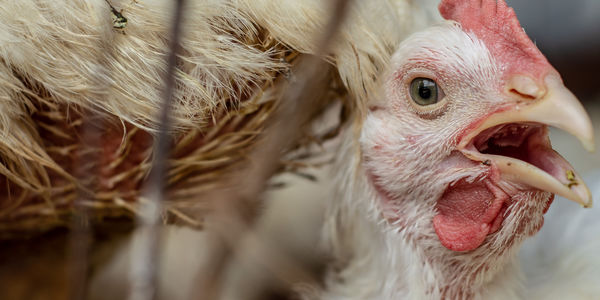 Costco is Hurting the Animals It Sells as Meat. Demand Government Action Now!

Costco is one of the largest membership-based grocers and retail stores in the U.S. - and even the world. One of Costco's biggest claims to fame is its low-price meats sold at its many warehouse-esque stores. That includes cheap hot dogs and whole rotisserie chicken meals sold for just $4.99 a piece.

But selling a formerly-living being for such a low price means cutting costs and corners somewhere. After all, the corporation isn't doing this out of the goodness of its metaphorical heart. No matter what, Costco will still ensure that it still pulls in a profit. All this comes with a price. And in this case, we're learning that price is the mistreatment of animals.

Sign the petition to demand that the U.S. Food and Drug Administration (FDA) investigate Costco and its chicken suppliers, and hold them all accountable!

Just last year, in 2021, Costco sold approximately 106 million rotisserie chickens in its stores. And many of these birds endured agonizing conditions during life. Undercover footage by the organization Mercy for Animals reveals that Costco's farmers purposefully pushed chickens to become so large, so fast, that it was impossible for the animals to stand on their own two legs, causing them to collapse. As recent lawsuits against Costco claim, the process left the "disabled birds [to] slowly die from hunger, injury, and illness."

Once immobilized by their weight and size, the birds are left to linger on floors filled with feces, often developing the avian version of bed sores - excruciating and bloody open wounds on their bellies or backs. Meanwhile, they see no natural light: just artificial incandescence. No natural breezes or fresh air. And no humanity.

Even worse: the new lawsuit alleges that Costco's top executives "caused, [are] aware of, and consciously disregarded clear signs of Costco's ongoing mistreatment of chickens."

Now that we have concrete evidence that Costco, as the lawsuit says, "illegally neglects and abandons its chickens," the U.S. government must act. Tell the FDA to inspect all Costco chicken suppliers' facilities, and mandate improvements now!
Sign Petition
SHAREShare With FriendsTWEETEMAILEMBED
Sign Petition
See more petitions:
You have JavaScript disabled. Without it, our site might not function properly.