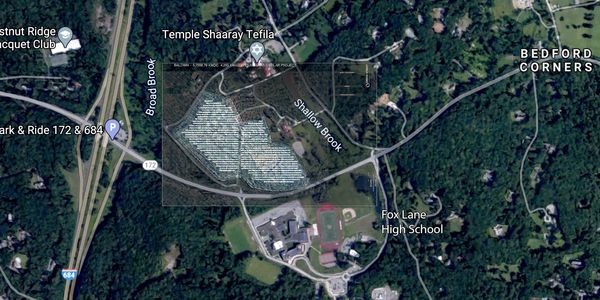 I am signing this petition to register my opposition to Green Street Power's proposal to change our zoning laws in order to clear up to 24 ACRES for a commercial solar array in the heart of Bedford.

DEVELOPERS HAVE SUBMITTED A FORMAL PETITION TO THE TOWN OF BEDFORD TO REWRITE OUR ZONING LAWS UNDER THE GUISE OF CLEAN ENERGY:

Zoning changes (called "solar siting", "spot zoning" ect.) would open the floodgates for commercial solar plants to be constructed in our residential neighborhoods. While we all want to pursue renewable energy, there are better solutions already being implemented. History teaches us that easing zoning protections usually favors the developers and leaves residents with irreversible changes to their neighborhoods. Case in point: Mt. Kisco recently changed their zoning, and as a result they are about to lose their last parcel of open space. Zoning laws protect us against inappropriate projects being built on our open space.

WE DO NOT NEED TO CHANGE OUR ZONING LAWS TO MEET OUR SOLAR OBJECTIVES. We highlight some of the issues below:

Open space has long-term value – Bedford residents value open space: our woodlands, meadows and horse farms define our community. We are also ardent supporters of solar energy. Just drive around our scenic roads and you will see solar panels on houses, barns and other properties. But developers argue that Bedford's open spaces are ripe to develop into commercial projects. What we call open meadows and forests, they call "disturbed acreage." Bedford was once a farming community — virtually every open space in Bedford was once plowed farmland and thus "disturbed." Our forests are young and in the process of maturing. Calling them "second growth forests" makes them sound disposable, but Bedford wouldn't have any woodlands without them, and you can't get to old-growth without giving trees time to mature.

Rezoning Gone Wrong: A cautionary tale of two cities – The towns of Mt. Kisco and Yorktown are two examples of solar zoning changes that had unintended consequences. In both cases, developers pitched "palatable" locations as first projects, which enabled the zoning changes. In Mt. Kisco, the location was a cemetery; in Yorktown, a parking lot. But this was a bait and switch. The problems came with the subsequent projects. In both towns, once zoning laws were changed, new ground-mounted projects were introduced in controversial open spaces, such as residential woodlands (next to Marsh Sanctuary in Mt. Kisco) and residential farmlands (Hemlock Hills Farm in Yorktown). If we allow Green Street to change our zoning laws for its 24-acre solar project, where will the next site be?

"Community Solar" sounds local, but it isn't – Misleading statements have been made about community solar. "Community Solar" refers to 3rd party solar utilities that feed the electrical grid. Community Solar is just another type of ESCO (Energy Service Company), not a local program like a community garden. Locating commercial solar arrays within the community does not provide any benefit to Bedford's electrical supply and electrical resilience. Bedford's electricity is provided by New York State's robust electrical grid. Subscribers to community solar programs are merely funding the operations of a specified commercial solar array, the location of which could be anywhere in the utility district (for ConEd this includes New York City, and NYSEG includes upstate NY). Locating a solar power generator in our town will have no impact on our personal electricity.

New York State is ahead of its sustainability plans – Developers argue that New York State cannot reach its sustainable solar goals without local development in Bedford, but this is not true. Currently, the existing solar project pipeline for the state is more than 5 years ahead of plan. New York has the strongest community solar market in the nation, with the most completed projects. For example, the New York Power Authority (NYPA) is building a solar installation at JFK Airport, which will become NYC's single-largest community solar project. New York recently accelerated its efforts to help local governments and agencies in the state develop community solar projects on municipal buildings and land.

Use parking lots and rooftops for solar, not open space – The argument that we must sacrifice our open spaces to pursue solar energy is deeply flawed, and it unnecessarily pits conservationists and green energy advocates against each other. As discussed above, Bedford is already contributing to the transition towards renewable energy without converting our limited green space. Our efforts can be enhanced by utilizing sustainable locations like parking lots and rooftops to generate solar energy, but developers armed with tax incentives and rebates argue that open space is more "cost-effective." Unfortunately, their plans involve clearing fields and cutting down trees. (And in Green Street's case, decapitating remaining trees at 35 feet.)

The Money: Good business for developers is not good business for us – Efforts to build commercial solar farms are financial, and unfortunately certain areas of Bedford are perfect targets. Developers are financially motivated to build in districts with high electricity rates (ConEd) and low construction costs (open space).  ConEd utility rates are $0.25 kWh, whereas NYSEG is half that amount with rates at $0.12 kWh. Developers like Green Street can make twice as much revenue by building in ConEd areas, while their cost remains the same. Developers will say that a limited group of residents may be eligible for a small discount on our electrical bill, but they don't tell us that these discounts are already offered to all of us through existing community solar programs. The town loses its open space in exchange for nothing substantive in return.

We are easy targets of "greenwashing" – Words like "renewable" or "green" speak to our genuine desires to be responsible citizens, but this also makes these words effective marketing tools. Climate change is real and we need to transition away from fossil fuels. We all know this and understand the urgency to make changes. But the highest standard we can set for such efforts is to combat these issues while protecting the priceless value of our open spaces. We must not be coerced into sacrificing our open land to commercial solar developers, whose primary incentive is profit rather than the thoughtful integration of renewable energy in our community.