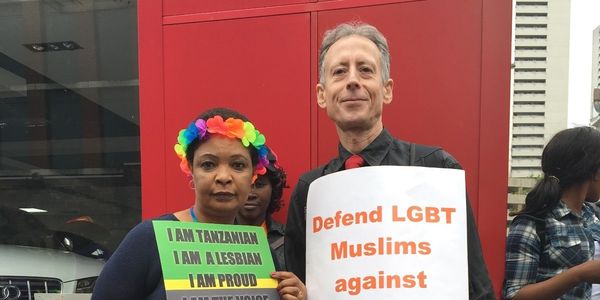 URGENT: STOP THE REMOVAL OF HADIJA.A. MWENSHEE (A LESBIAN WOMAN) TO TANZANIA

The UK Government says, "We don’t deport LGBT asylum seekers and we never will." Is that a lie? Let’s stop the deportation and detention of HADIJA.A. MWENSHEE NOW!

We, the undersigned, petition the Home Office to free Hadija Mwenshee [HO Ref M1446619] from detention, and not to deport her to Tanzania, where she faces a grave risk of harm and a threat to her life and liberty.

Hadija is a Tanzania lesbian who has been active in the LGBTI community in the UK. She is much loved and respected in our community, and we reject any suggestion that she is somehow not a genuine lesbian.

Hadija has a visible online presence, and gay haters and tabloids have already published her in their news accusing her of explicitly promoting homosexuality in the UK.

Please allow Hadija to continue her life in the UK and to live freely in an open and tolerant society.

Hadija left Tanzania after leaving her husband whom, for the years she was married to him, treated her as a slave: daily mistreatment, humiliation, and rape.

Hadija managed to leave Tanzania through the support of her friends and came to the UK. While in the UK she started a new life, which she describes as being reborn. In 2016 with the support of LGBT groups in London, Hadija submitted an asylum claim and explained in a basic description why she did not want to return to Tanzania. The Home Office did not believe her asylum claim and refused to accept her past relationships in the UK, in spite of her friends attesting to them.

On the 29 August 2017, The Home Office detained Hadija and tried to deport her the same day. However, with the support of friends and her lawyer, the HO halted her removal. Right now she is in detention, and her life is not in good form.

Out and Proud African LGBTI is determined to testify for Hadija until the last possible moment, noting: “Hadija Mwenshee is now well known as a lesbian in Tanzania, due to prior 'outings' in the Tanzanian tabloids, her familial victimization, and her activism while abroad.

Hadija's openness will be used to persecute her in Tanzania if she returns. It could lead to mob vengeance, assaults, blackmail, making it impossible for her ever to obtain accommodation and work. She will be forced into hiding, having no resources to sustain her. This deportation must be stopped and would be a shocking testament against the UK’s purported stand for LGBTI asylum seekers if it is not."

Please urge the UK Home Office to:
(i) release Hadija from deportation
(ii) agree to reconsider her case