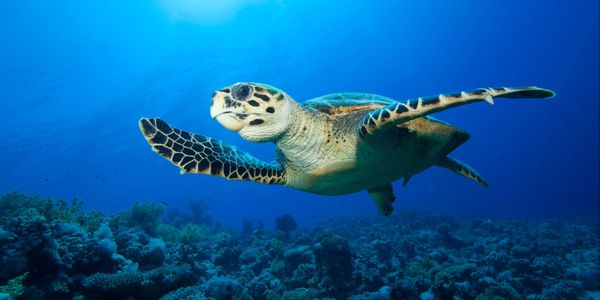 These Turtles are Disappearing Because Artisans Use Their Shells for Jewelry

Another day, another depressing tale of how human greed has pushed an animal species to the edge of extinction. This time we travel to the islands of Japan where an ancient trend just won't die but perhaps an entire species will.

More than 400 years ago, the shogun Tokugawa Ieyasu got his hands on a beautiful pair of eyeglasses. The brown, white and orange frames were made from the carapace of the hawksbill sea turtle. They were the talk of the town. The trend quickly caught on, and before long, people all over the country, and then the world, were lining up to get their hands on bekko - the local name for the luxury product. From Europe to the Americas, tortoiseshell products from glasses frames to earrings became a must for the wealthy elite.

But hawksbills don't grow on trees. And the demand for tortoiseshell wreaked havoc on the turtles' population. From 1844 and 1992, more than nine million were killed. This year, according to the latest count, there are just 25,000 that remain.

Luckily, conservationists began ringing the alarm and by 1977, the international trade in hawksbill parts was banned. When Japan signed on to the CITES - the treaty charged with protecting endangered animals - they reserved their right to continue to import hawksbill products. That was until 1994 when international pressure forced them to withdraw the reservation.

Yet, a quarter-century later, you can still find bekko jewelry for sale and proudly displayed in shop windows.

According to National Geographic, anyone interested in buying bekko need only travel 30 miles from Japan's capital. Enoshima and other small villages like it along the eastern coast specialize in the contraband material. Tourists who flock to the area can find everything from necklaces to earrings.

This is unacceptable. Japan must end the entire trade of bekko as to discourage the illegal poaching and importation of hawksbill products. Similar to bans on tiger, rhino and elephant parts, their success depends on the nations' commitment to helping these endangered animals survive. Clearly, if hawksbill products are sold freely then Japan's commitment is lacking.

It is time Japan put an end to the bekko market and ban all sale of hawksbill. Sign the petition and help save this beautiful animal.
Sign Petition
SHAREShare this petition with friends!TWEETEMAILEMBED
Sign Petition
See more petitions:
You have JavaScript disabled. Without it, our site might not function properly.