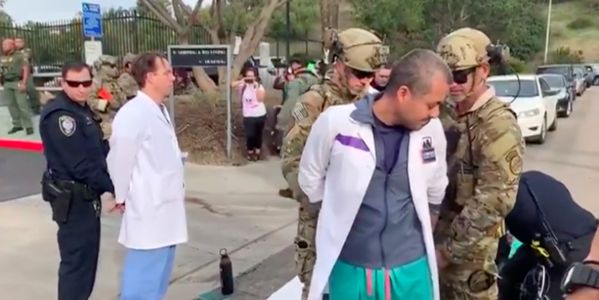 These Doctors Were Arrested for Trying to Save the Lives of Children the U.S. is Still Keeping in Cages!

Doctors say flu season has started early this year. For most who simply have to find the time to get a flu shot at their doctor's office or local pharmacy, this is an inconvenience. For children in U.S. Customs and Border Protection (CBP) custody, it is a death sentence.

Three detained migrant children, ages 2, 6, and 16, have already died from influenza this year. That's why Doctors for Camp Closure has made a plea to the Trump administration that they be should be allowed to set up a flu vaccine clinic for migrants and asylum seekers. This would come at no cost to the administration or its agencies and save countless lives, but it was shot down for no apparent reason.

The doctors of the organization, knowing this was cruel and unfair, decided to protest. But instead of conceding, the government sent federal authorities in full military gear to arrest them.

Dr. Marie DeLuca, one of the co-founders of Doctors for Camp Closure, says that CBP detention facilities are directly creating the medical emergency they are trying to fight. When people are kept in crowded conditions for long periods of time, infectious disease is inevitable. Current facilities were designed to hold migrants for up to 72 hours - their actual holding time is much longer. In the previous decade, before the Trump administration's heinous policies took effect, not a single child died in custody. Last year 6 passed away after being detained.

The doctors have been cited and released, although it is unclear what the feds cited them for - there's nothing wrong with fighting for what's right. Now that they are free again, they must be allowed to do the important work of saving lives at the border.

These deaths must end! Tell Trump administration, the DHS and HSH to approve the vaccination of detained migrants and asylum seekers immediately!
Sign Petition
SHAREShare this petition with friends!TWEETEMAILEMBED
Sign Petition
See more petitions:
You have JavaScript disabled. Without it, our site might not function properly.

Care2
These Doctors Were Arrested for Trying to Save the Lives of Children the U.S. is Still Keeping in Cages!
SHARETWEET