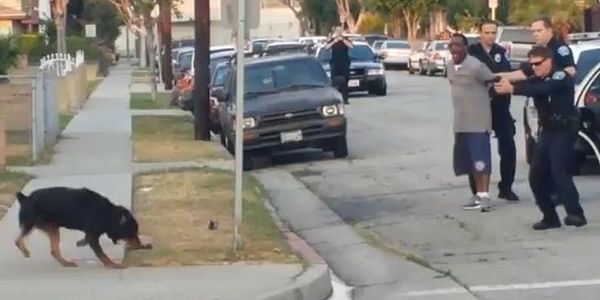 A specialist from the Department of Justice has announced that another epidemic is happening in the United States, but unlike COVID-19, this one is far from new. It's the epidemic of police officers shooting dogs -- our family pets, our sweet companions.

Take, for example, Junior Gonzalez. Just last month, in June 2020, he was working late at the laundromat he owns and operates with his wife in Atascadero, California. No doubt his small business was affected by the coronavirus pandemic, and working late may have been the only way to survive. A passing deputy did not stop to consider the many reasons someone might be working late -- instead, he automatically assumed it was a burglary and drew his weapon. Gonzales' two sweet pitbulls, Roxi and Luna, had been helping their dad that night, and when the officer approached, they barked -- Junior said that Roxi ran towards the officer and began sitting, which is what she usually did when she wanted to be petted. The officer responded by shooting the sweet girl in her jaw, chest, and leg.

This story is not an isolated incident. It is estimated that police in the United States kill a dog every 98 minutes. Please sign the petition to demand that each of the 50 states treat this like the epidemic is, and pass real reforms to save animals from pet-murdering cops.

The numbers are harrowing, and vary greatly since police cannot be counted on to disclose all of the animals they are murdering in the line of duty. The Puppycide Database Project, which relies heavily on their own research and tools to find the true numbers behind this crisis, has estimated that the number of our pups being gunned down by officers is close to 500 dogs a day. These dogs are often safely leashed, or residing in their own homes. The 'perceived threat' a cop feels from a dog can be as small as a bark, a movement, or simply being in a small space with the officer. Why is the burden of deescalation being placed on our pets, instead of the trained professionals?

Innocent pets being slaughtered by police is a symptom of a much greater problem -- at the slightest provocation, police just shoot first and ask questions later. And they have complete impunity to do so. We are told that the police exist to protect and serve us, but time after time, we see that the lives police are protecting are their own.

Even when there is a dog that feels threatened or protective, why would executing the dog with a gun shot at point blank range be the protocol? The way police plan for and carry out interactions with animals desperately needs reform. Some key changes include using non-lethal methods of protection, researching which homes have animals before entering, and training officers to understand animal body language and behavior, just to name a few. And of course, police officers must face consequences when they slaughter our pets. Should that even have to be said?

Please sign the petition if you agree that enough is enough! All 50 U.S. states need to reform the way that police approach interactions with animals, and must implement harsher punishments for dog-killing cops. Thousands of our dogs' lives depend on it.