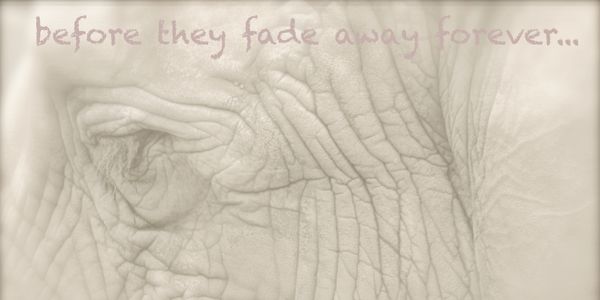 Thank you, all of you. We are just a few hundred signatures from our goal. Arrangements are being made deliver this to the Pope! So please join us and ask Pope Francis to speak out against poaching our elephants, rhinos, and all endangered species.

Regardless of religious affiliation, (or lack thereof), the Pope has embraced the entire world and so, the world has embraced him! He has spoken out for righteousness in all matters, and when he speaks, the world listens. WE need him to speak out loudly and quickly, before our wildlife has all been wiped off the planet! This insanity of these actions have alarmed the world, we need the Pope to intervene!

As you know, the three most lucrative international crimes are: 1) DRUGS, 2) HUMAN TRAFFICKING, and 3) ILLICIT TRADE IN WILDLIFE. The latter is consistently responsible for the terrorist activities of Al Shabbab, Boku Haram, and the Lord's Resistance.

Please join millions of others to ask Pope Francis to speak out on behalf of the disappearing wildlife our planet!

Thank you from our voiceless friends!

Your powerful, compassionate statements about our planet and its animals have brought global attention to the issues of our "common home". Your Encyclical calls on us to consider your Patron Saint, St. Francis, "a compelling figure, an inspiration", when you were elected Bishop of Rome. "I believe that Saint Francis is the example par excellence of care for the vulnerable and of an integral ecology lived out joyfully and authentically." And your beautiful yet simple statement, “Every act of cruelty towards any creature is ‘contrary to human dignity’."This is our focus.

In the spirit of St. Francis, and your committment to save our 'home', we are asking you to:

To help stop this activity by issuing a powerful statement on this issue. Please speak out against the buying and selling of ivory products and rhino horn that is fueling the poaching of elephants and rhinos. As you said in your Enclyclical, "Although each chapter will have its own subject and specific approach'.

It is our belief that it’s time to deal with the chapter that concerns the welfare and survival of elephants and rhinos, as well as all other species on Earth. The Sixth Great Extinction, the first one caused by mankind, is upon us. It predicts that by the middle of this century, 30 to 50 percent of all species will be extinct.

Despite a dramatic rise in awareness and significant legislation passed worldwide,  there has been no sign of decrease in the worldwide poaching of elephants for the illegal ivory trade.

Pope Francis we ask you to specifically address the killing of elephants and rhinos for the purpose of making things from their body parts. We believe if you do, it WILL make a difference.

And finally your Holiness, we are asking you to demonstrate your commitment to this cause by sponsoring an Ivory Crush at the Vatican.

The Vatican's collection of carved ivory being crushed in response to your dictum would attract much attention from around the world. It would focus on elephants and rhinos. But undoubtedly it will affect all out endangered species and the treatement of all animals in our world.

We hope your will take our wishes to heart and act on them as well,

Care2
Thank you, all of you. We are just a few hundred signatures from our goal. Arrangements are being made deliver this to the Pope! So please join us and ask Pope Francis to speak out against poaching our elephants, rhinos, and all endangered species.
SHARETWEET