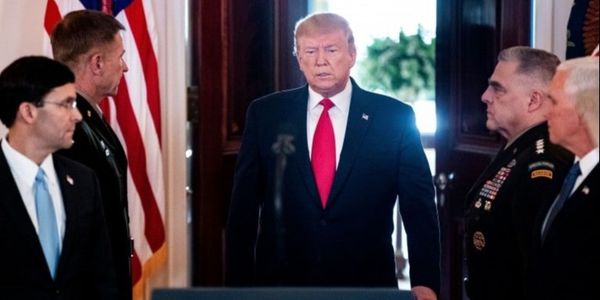 Tell the Senate to limit Trump’s authority to go to war with Iran!

On January 2nd, President Trump ordered a US drone strike in Iraq that killed General Qasem Soleimani, the commander of Iran's Islamic Revolutionary Guards Corps (IRGC) Quds Force, without consulting Congress or providing anything resembling adequate justification for such brazen, destabilizing aggression. In the days following the attack, tensions with Iran reached levels we haven't seen in 40 years, a cause for concern if peace happens to be of passing interest.

To be clear, Soleimani was a very bad apple with a long track record of belligerence towards the U.S. But he was also a high ranking official of a sovereign nation with whom the U.S. is not at war.

The world is full of bad people in positions of considerable power. It should be obvious why we don't go around executing them on foreign soil – killing a bad guy is easy. Controlling the fallout afterwards is most decidedly not. In fact, the last time the United States assassinated a sovereign nation's military commander – an admiral of the Japanese Navy – was nearly 80 years ago at the height of World War II. Extraordinary circumstances to say the least.

On January 9th, the House of Representatives rightly passed a resolution to sharply limit President Trump's ability to wage war on Iran. President Trump — like Presidents Obama and Bush before him — has been circumventing Congress by continuing to cite use-of-force resolutions from 2001 and 2002 to essentially wage war and conduct military operations with impunity and minimal oversight. Originally drafted for military operations in Afghanistan to take on al-Qaeda, these resolutions have been recycled and repackaged time and again for American military intervention throughout the Middle East and beyond. Enough is enough.

The U.S. Senate will soon take up a similar resolution to restrict President Trump's ability to wage war on Iran without Congressional approval. Any decision to engage our military should require specific Congressional action and – one would hope – robust debate.

Demand that the Senate fulfill its obligations and re-establish its rightful, solemn role when it comes to authorizing use of American force. Our military deserves nothing less.

Care2
Tell the Senate to limit Trump’s authority to go to war with Iran!
SHARETWEET