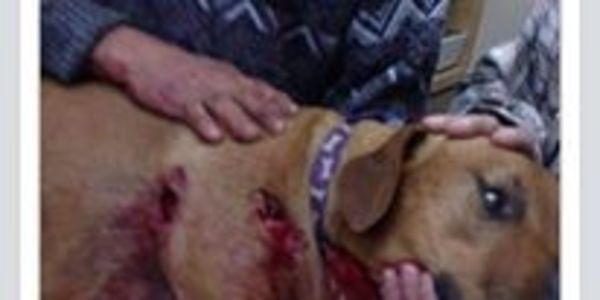 Justice for Shadow Shot by Fort Worth Police with a Shotgun

You hear about dogs being shot by police, but you never imagine it happening to your dog. That was the night mare that happened to a homeless man, Lonnie Reynolds and his dog, Shadow. They were minding their own business, not hurting anyone or anything, taking a nap. Unbeknownst to them, three officers with the FWPD used the stealth method to approach the tent. One second they heard "Fort Worth Police" then next "Hold that dog," and then the fateful shot that he will never forget... He knew that Shadow had been shot.

Lonnie crawled out of his tent calling for Shadow, unable to walk because his prosthetic leg was off in order to be more comfortable. Shadow returned to his dad after hearing his voice and Lonnie did what he could do for him. After a 30-40 minute wait, Lonnie was allowed to take Shadow to the vet. Lonnie and Robin Fairchild (Lonnie's ex and Shadow's mom) were told chances to save Shadow were poor. They chose the option that would cause the least suffering. Shadow was euthanized-their fur son now dead. The wait was too long...

Lonnie, Robin, and James (Shadow's stepdad) want the officer who fired the shot to be held accountable for his actions of excessive force and cruelty to animals, and, should he retain his job, to undergo a more stringent animal training program. And since his two colleagues appear to go along with his actions, they, too need to be held accountable and undergo the same training. Supposedly, FWPD has animal training, but obviously it's inadequate.They also would like the Texas Legislature to enact specific laws that will require mandatory training in how to handle dogs with non-lethal means, such as pepper spray and/or tasers; in addition, the legislation needs to provide mandatory penalties if officers choose not to use non-lethal means. Ideally, they'd like U.S. legislation to mandate such procedures be enacted nationwide, and are willing to take this to the U.S. Supreme Court if necessary. Let's assure no more families have to suffer the loss of their fur children like this!