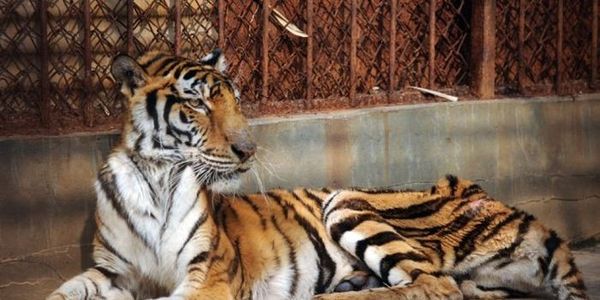 Behind rusted bars, a skeletal tiger lies panting on the filthy concrete floor of his cage, covered in painful sores and weeping wounds. His once-powerful body is now so emaciated it is little more than a pitiful pile of fur and bones. In row after row of foul, cramped cages, 1,500 other tigers also lie alone, crippled and dying of starvation. One is hunched up against the side of her cage, her neck grotesquely deformed. Another, blinded in one eye, lies motionless. Others are kept locked in small, concrete enclosures, spending their days in perpetual darkness. They occasionally jump up on their hind legs to peer through the narrow slit windows, desperately seeking a rare glimpse of daylight.

When death finally comes, the dead tigers are taken to a massive subterranean factory. Here, they are stripped of their valuable skin and flesh and have their bones join the hundreds of tiger skeletons boiling in huge wine vats. This is the Xiongshen Tiger and Bear Mountain Village - the largest collection of endangered tigers in the world.

Throughout China, it is estimated that at least 6,000 tigers - twice the amount existing in the wild - are suffering and dying in horrific "tiger farms" like Xiongshen. These vile businesses, run by a handful of wealthy and powerful men, breed and slaughter thousands of tigers in concentration camp-like conditions - all so that their owners can make millions by selling tiger parts under legal permit from China's State Forestry Administration. China's legal tiger trade is in violation of CITES agreements and has single-handedly undermined millions of dollars in conservation efforts.

Ever since the first tiger farms were established in the late 1980s, demand for tiger products has greatly increased, and, with it, tiger poaching. It is still cheaper to kill a wild tiger than to raise a captive one, so tiger farms frequently abuse the permit system and launder illegally-poached tigers as captive specimens for greater profits. The result is that, every single day, at least one more wild tiger is killed to fuel China's demand for parts. If this continues, the tiger will be extinct in the wild in just 20 years.

But tiger farm owners don't care. In fact, many of them are literally banking on extinction, accumulating stockpiles of bones and carcasses as a bloody "investment" which they hope will increase in value once the tiger is gone forever.

This evil industry has its roots in a single, outdated law. Under China's 1989 Law on the Protection of Wildlife, wildlife is merely a resource for human use. The law encourages the breeding of tigers, bears, and other wildlife for commercial purposes, set up the frequently-abused permit system for selling wildlife parts, and affords captive animals no legal protection from abuse and neglect. Fortunately, attitudes in China are quickly changing - and the law is about to follow.

As the cries for change become stronger, Chinese lawmakers are finally revising the Law on the Protection of Wildlife. This single law has the potential to shut down the tiger farms, end China's wildlife trade, and turn the nation into a global leader in wildlife conservation.

The National People's Congress Standing Committee, China's legislative body, plans on considering a new draft of the law by the end of this year. So far, things appear to be moving in the right direction. Insiders claim that the current draft discourages wildlife trade and promotes animal welfare, something which would have been unprecedented just 5 years ago.

But there is no room for complacency. The current regulator for wildlife breeding is largely pro-trade, and the multimillion dollar, politically-connected tiger farming industry has a strong lobby force. They will be doing everything in their power to ensure that their evil business continues - and that the tiger goes extinct.

The good news is that China values its international reputation above all else, meaning that a massive global outcry will encourage lawmakers to do the right thing and put an end to the tiger trade once and for all. If they do, conservationists say that it would be "the single biggest contribution to securing a future for wild tigers."

The decision that China makes within the next year could mean the difference between extinction and survival for the wild tiger. Until then, it is up to every conscientious citizen to urge them to do the right thing.

Together, we can put the dark stain of tiger farming in the past, and create a future where the greatest of the great cats is free to be wild.

I am pleased to learn that the Law of the People’s Republic of China on the Protections of Wildlife is currently under revision. The revision of this Law has the potential to promote animal welfare, improve China’s reputation, and help China to become a world leader in wildlife conservation.

As you are no doubt aware, the current version of the law permits the captive breeding of protected species for commercial purposes. This has led to the establishment of over 200 “tiger farms” across China. At these facilities, such as the Xiongsen Bear and Tiger Park and the Heilongjiang Siberian Tiger Park, thousands of endangered tigers - some of the most revered animals in Chinese culture - are being bred and housed in unacceptable conditions so that they may be slaughtered and sold under legal permit by the State Forestry Administration. The legal trade in captive-origin tiger parts has greatly increased the demand for poached wild tigers, undermined international conservation efforts, and brought international shame unto China and its people1.

In less than a century, the world has lost over 97% of its wild tigers. Wild tiger populations have plummeted from over 100,000 to only 3,200 in just a few generations. Unfortunately, statistics show that ever since the legal trade in captive-origin tiger skins became established in China, the rate of tiger poaching has increased dramatically2. This is because commercial breeding has removed any stigma from tiger products, making consumers believe that by purchasing them, they are not harming wild populations. But wild tigers are still cheaper to kill and smuggle across borders than captive bred ones, and criminals frequently abuse China's permit system to sell illegally-poached tigers as legal specimens. As a result, it is now estimated that poachers kill at least one wild tiger every single day to supply Chinese markets. If this continues, the wild tiger will likely become extinct within 20 years. This is a tragedy which we must not allow to happen.

Along with the Dragon, the Tiger is one of the intertwining threads of ancient Chinese culture, and a global symbol of power and beauty. But under the current version of the Law on the Protection of Wildlife, thousands of these regal animals are crammed into tiny concrete cages, awaiting death. They suffer horribly, often lying in their own excrement until the time comes for them to be slaughtered, skinned, and sold. Some facilities kill the tigers by deliberately starving them to death, in order to claim that the animals perished due to “natural causes". This is simply unacceptable. Treating one of our most beloved and revered creatures like a commodity makes a disrespectful mockery of traditional Chinese culture, and it must not be tolerated. According to Professor Mang Ping of China's Central Institute of Socialism3:

“Ancient manuscripts show that animal protection was the first activity to be regulated by the ancient dynasties. Our culture is embedded in benevolence, which is the core of Buddhism -- and if we lose benevolence, we lose Chinese culture.”

Indeed, recent surveys have shown that 93% of Chinese citizens would support a total ban on the trade of tiger products in order to protect tigers in the wild4. The World Federation of Chinese Medicine Societies is opposed to the use of tiger bone in medicine, having advocated alternatives since 1993. In 2010, Former Premier Wen Jiabao made a commitment in St. Petersburg that China would work with the rest of the world to double the wild tiger population by 2020. But by allowing a legal trade in tiger parts and failing to crack down on those who violate the law, China is breaking its promises and working against the conservation efforts that many other countries have put in place. The stark contradiction between China’s international posture, supporting efforts to save the wild tiger, and its inward-facing domestic policies, which drive the poaching of the animals, has done incredible harm to tiger conservation. China must vigorously address and terminate this intolerable disconnect between words and deeds which so undermines international efforts to save the tiger.

Until China amends its Wildlife Protection Law to truly protect the welfare of both captive and wild animals, its' shameful inaction will continue to contribute to the country's poor reputation in international circles. News reports, films, and books about China’s captive tiger industry are becoming widespread throughout major international media outlets, sparking global outrage and bringing condemnation and shame upon China and its people. Ultimately, however, the trade in captive tiger parts is championed only by the powerful men who run the farms. Their distasteful business does not aid China’s economy, nor does it help protect tigers from poaching. It only serves to make a handful of men very wealthy while driving the wild tiger further towards extinction, and while giving China a bad name.

The actions which The People's Republic of China chooses to take will make the difference between extinction and survival for one of the world's most revered animals. If the trade in tiger parts is allowed to continue, the wild tiger will almost certainly become extinct within the next few decades. This would be an unimaginable tragedy, a huge blow to China's reputation, and a great loss to planet Earth. Fortunately, China is poised to prevent this tragedy from ever happening. One of India’s most prominent tiger conservationists, Belinda Wright, has stated that by instituting a total ban on the trade of tiger parts, China would be responsible for "the single biggest contribution to securing a future for wild tigers5."


The future of the tiger is in China’s hands. With the right legislation, China will ensure that the King of Animals continues to thrive in the wild for many generations to come.

2. Stallard, Brian. "Tigers, Farms, and Confusion: What You Don't Know About the Tiger Trade Is Killing Them." Nature World News. November 24, 2014.