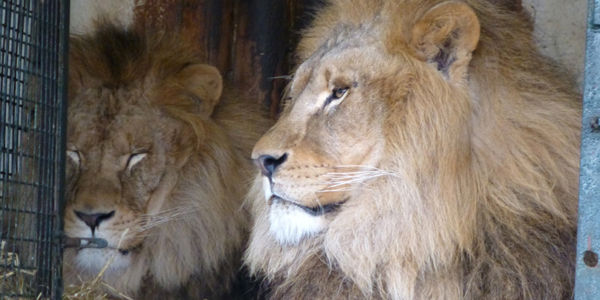 ‘Britain’s last lion tamer’ Thomas Chipperfield has started touring the UK with a new show "An Evening with Lions and Tigers", in which wild animals are forced to perform circus tricks.

Lions Assegai and Tsavo, and tigers Nadia, Altai and Syas are made to live in cages on the back of a lorry known as a ‘beastwagon’.

Animal Defenders International has documented the Chipperfield big cats exhibiting abnormal repetitive behaviour which indicates that their welfare is being compromised by the inadequate environment. Vet Marc Abraham described it as "a sure sign their welfare is severely compromised".

Such behaviour is not seen in the wild but is commonly seen in animals made to perform.

Making wild animals perform for the sake of entertainment provides no educational or conservation value to the audience and sends a damaging message, especially to young people.

Herefordshire Country Show cancelled a planned performance of Chipperfield‘s big cat show after public outcry over the animals' welfare - over 12,000 people signed that petition in four days. Over 54,000 opposed the show in Wrexham, attracting widespread media coverage. If enough people sign this petition, we can show land owners that the animals deserve better.

If you agree that lions and tigers should not be caged, confined and made to perform, please sign and share our petition today calling on landowners not to allow this and other wild animal acts on their land. Thank you.

We are opposed to the display of lions and tigers owned by Thomas Chipperfield, and indeed any other performing exotic animals, and urge you cancel their scheduled appearance on your land.

We would also respectfully ask that you consider all of the evidence surrounding exotic animals used for performances and adopt a policy not to allow any form of entertainment which uses wild animals on your land.

Studies by international animal protection organisation Animal Defenders International (ADI) have shown that animals used for entertainment are deprived of all the normal, social and mental stimulation that they would enjoy in the wild. Any discipline or abuse tends to occur behind the scenes while the animals are being trained, making it almost impossible to ensure that a performing animal has not suffered during a lifetime of training.

The lions (Assegai and Tsavo) and tigers (Nadia, Altai and Syas) owned by Mr Chipperfield live in cages on the back of a vehicle known as a beastwagon. These poor individuals have been shipped to Britain from Ireland and previously toured with Peter Jolly's Circus before spending the cold winter on the Scottish coast, and subsequently returning to England and Wales.

ADI has documented the Chipperfield big cats exhibiting abnormal repetitive behaviour which indicates how their welfare is being compromised by their inadequate environment. Vet Marc Abraham described it as "a sure sign their welfare is severely compromised". Such behaviour is not seen in the wild but is commonly seen in animals made to perform.

In the wild, tigers live a mainly solitary life with limited contact with other tigers in a home territory which could be as vast as 470 km2 – a stark contrast to how these animals are kept by Mr Chipperfield. The ability to be able to patrol their huge natural territories is described as "an essential behavioural drive" by wildlife vet Simon Adams.

The British public is opposed to the use of performing wild animals, which is reflected by the overwhelming support for a ban on wild animals in circuses. A 2005 MORI poll found 80% supported an end to such acts and a 2013 YouGov poll found 78% and 79% believed lions and tigers should not be used in circuses. Recent public consultations have revealed even greater support with 94.5% in favour of a ban, rising to 98% in Scotland.

Over 200 local councils have banned animal circuses from using public land and the Government is committed to ending this archaic form of entertainment nationwide, with legislation already drafted which will prohibit wild animal use in travelling circuses.

Making wild animals perform in the name of entertainment provides no educational or conservation value to the audience and sends entirely the wrong message, especially to young people.

Considering public attitudes on this issue and the inherent suffering of the animals involved, we urge you to cancel the big cat display and set a policy in place to protect wild animals from being featured at future events on your land.