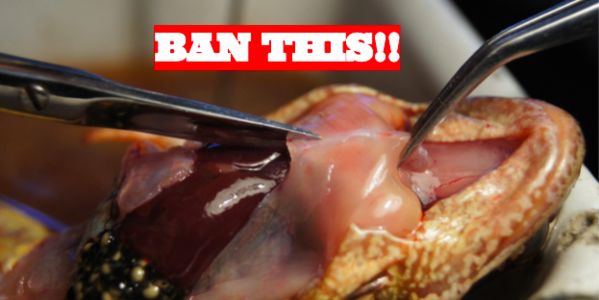 Imagine being snatched from your home; imagine being alive for the sole purpose of dying; imagine being stuck in a cage and being sent off to be slaughtered. These are a few things that millions of animals have to go through, these animals include frogs, cats, dogs, pigs, mice, rabbits, fish, worms, the list goes on and on.

We must replace the traditional animal dissection method with newer and better teaching tools in science classes. I offer the following contentions:

The animals that we dissect were already dead. Don't be fooled, they were murdered. Multiple sources have stated that these animals are taken from the wild, breeding facilities, pounds and fur farms.

According to The Humane Society of The United States, "Investigators have discovered suppliers drowning cats in burlap sacks, injecting rats with embalming fluid, and keeping frogs for weeks without food."

"It teaches an unspoken lesson that animals have no greater value than to be experimented on and that they are disposable objects whose purpose is to be used for human exploitation." States Jessie Gray.

Lastly, animal dissection is NOT the best way to learn.

"Teachers and professors recognize that students can learn equally as well, and often better, through the use of modern technology. The majority of studies published in peer-reviewed journals show that students learn more when using alternatives to dissection. There is also an important lesson taught when not using real animals: Students learn to respect living beings and begin to appreciate and understand the role of animals in nature. This is fundamental to biology, the study of life" -The American Anti-Vivisection Society

An alternative to animal dissections is digital dissection programs. Such as, Merge Labs, Inc., allows students to hold and interact with virtual objects—like human organs and frogs—for a safe, fun, and kid-friendly experience. Paired with apps like Anatomy AR+ and Mr. Body, Merge cubes come to life with high-quality virtual and augmented reality exploration of complex anatomical features. With Merge Explorer, students can virtually dissect a frog in 3-D. (For more info. check out this link https://www.youtube.com/watchv=XiLXyFgTjA&list=PLXRxhupsbkF1RtSvL0NoVjNI8iobGNR6r)

As an 8th grader now, I still remember the smell of the frog specimens in my 7th-grade science class. The smell would waft out into the hallways and taint the air for days. My whole class would walk into the science room and wrinkle their noses. Although I am not sure what chemical caused the smell, formaldehyde, Carosafe, and Biofresh are common preservatives used to preserve animal bodies according to PETA. Even today, the whole dissection subject was revolting to me.

By banning animal dissection you are not only advocating for the millions of animals but also the countless students that are affected. We have the technology and resources at our fingertips so why don't we use them to replace the traditional dissection method?