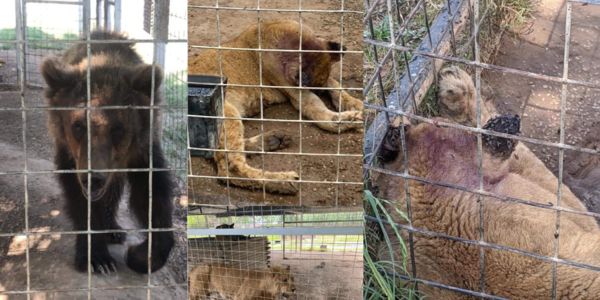 Demand the animals of G.W. Zoo be relinquished

Tiger King phenomena aside - the animals of the Greater Wynnewood Exotic Animal Park, aka G.W. Zoo in Wynnewood, Oklahoma ARE SUFFERING!

Since 2016, the park and its animals have been under ownership of Jeffrey Lowe, dba Greater Wynnewood Exotic Animal Park, aka "G.W. Zoo" (USDA license no. 73-C-0230) when he bought the facility from Joseph Allen Schreibvogel aka Tiger King.

As a USDA licensed exhibitor, Jeffrey Lowe is required to adhere to the standards of animal care set forth by APHIS and the Animal Welfare Act (AWA). APHIS' Animal Care program is responsible for the day-to-day administration of the AWA, including establishing acceptable standards of humane care and treatment for regulated animals and monitoring and achieving compliance through inspections, enforcement, education, and cooperative efforts.

However, recent photos depict the animals being kept in deplorable conditions - a lion with severe mange and missing portions of its ear with bloody infection; an emaciated and mangy grizzly bear; lions with severe flystrike (a condition in which fly larvae are laid under the skin of an animal and maggots hatch and eat away at the skin) and open wounds laying lifeless in the mud - and the public's safety is at risk with breeching of safety barriers and a lion attempting to escape. Needless to say - the sights are not pretty - and no animal should have to suffer like this.

As of June 2019 - Jeffrey Lowe's facility had more than 200 animals (including 82 tigers!) spanning 37 species. Today the exact number is unknown. However, with this many animals, it is clearly impossible to uphold the standards of care required by APHIS and the AWA.

The G.W. Zoo has positioned itself as a turn and burn tourist attraction that profits off the backs of innocent animals through cub petting and photo opportunities. This type of business model is unsustainable, and victimizes animals because of the perpetual nature required for a constant supply of cubs. Females are unnaturally bred multiple times a year—often up to three times per year, which is ten times their natural reproductive rate of one litter every 18-30 months in the wild. "Speed breeding" seriously comprises the mother's health, and many cubs have poor health and fail to thrive. Additionally, speed-breeding, cross-breeding and in-breeding, often results in genetic defects and severe, chronic health problems such as deformations, metabolic disorders, hip dysplasia, vision problems, congenital diseases and more.

As such, we urge the following officials to investigate Jeffrey Lowe and revoke his exhibitor license for his blatant violations of the Animal Welfare Act for the animals being kept at G.W. Zoo:

Jeffrey Lowe must adhere to the standards set forth by the AWA - and do the right thing for the animals. They've suffered long enough!

Lions Tigers & Bears, the Big Cat Sanctuary Alliance, and other reputable and accredited exotic animal sanctuaries across the United States stand by ready to assist the animals of G.W. Zoo. They need immediate medical attention by a qualified veterinarian, and species-specific diets and habitats - all of which the aforementioned will help facilitate.

End the suffering of the animals at the hands of Jeffrey Lowe, dba Greater Wynnewood Exotic Animal Park, aka "G.W. Zoo" (license no. 73-C-0230), by conducting an urgent investigation, revoking his exhibitor permit for apparent violations of the Animal Welfare Act (AWA) and confiscate these plainly suffering animals.

LEARN MORE ABOUT LIONS TIGERS & BEARS - a federally and state licensed 501(c)3 nonprofit rescue facility dedicated to providing a safe haven to abused and abandoned exotic animals while inspiring an educational forum to end the exotic animal trade. Lions Tigers & Bears is a NO KILL, NO BREED and NO SELL facility that allows the animals in its care the opportunity to live out their lives with dignity in a caring and safe environment. Lions Tigers & Bears is one of the few sanctuaries in the United States with the highest level of accreditation from the Global Federation of Animal Sanctuaries and the American Sanctuary Association.

Care2
Demand the animals of G.W. Zoo be relinquished
SHARETWEET