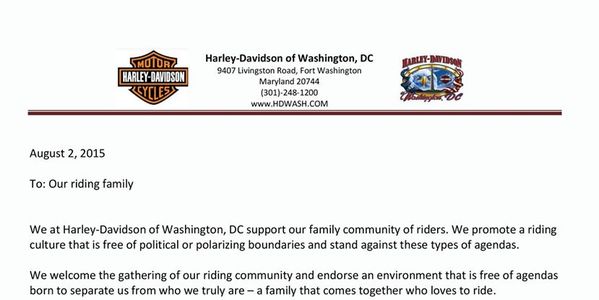 On October 10, 2015, Harley Davidson of Washington DC will be hosting a rally sponsored by Nation Of Islam leader Louis Farrakhan, called "the Ride For Justice".

We, the undersigned, are requesting Harley Davidson, Incorporated, take all steps necessary to put an immediate end to this franchis' support of this terrorist sponsored event.

Farrakhan has organized a "Million Man March" to take place in Washington DC on October 10, 2015, and is calling for all black bikers to participate by attending this coinciding event, originally called "Justice Or Else Ride" which has now been renamed the "Ride For Justice". Farrakhan has recently publicly called for the deaths of white people, white Christians, police officers, and anyone in the federal government who will not bend to his will and do his bidding, during a speech in which he is quoted as saying he needs “10,000 fearless men” to “rise up and kill those who kill us; stalk them and kill them and let them feel the pain of death that we are feeling!” See link here: http://www.breitbart.com/video/2015/08/04/farrakhan-we-must-rise-up-and-kill-those-who-kill-us-stalk-them-and-kill-them/

These statements can be seen as nothing less than a terrorist assault on Americans.

General Manager of HDDC, Anderson Morgan, was reportedly involved in a nationwide conference call for black bikers with the Nation of Islam on July 30th.

Joyce & Thomas Moorehead are the owners of the Harley Davidson dealership that is sponsoring the Nation of Islam event. Several appeals to the owners to stop this atrocity have gone unheeded. The dealership has posted the following statement on its Facebook page and website defending their support of the Farrakhan event:

"We at Harley-Davidson of Washington, DC support our family community of riders. We promote a riding culture that is free of political or polarizing boundaries and stand against these types of agendas.

We welcome the gathering of our riding community and endorse an environment that is free of agendas born to separate us from who we truly are – a family that comes together who loves to ride.

All riders will always be welcomed here at Harley-Davidson of Washington, DC to an environment that is free of cages."

Sincerely,
Your family at Harley-Davidson of Washington, DC


Americans are no longer going to sit idly by and watch the destruction of our country, nor support anyone who does. As an icon of American freedom, Harley Davidson, Incorporated, should understand better than any other, that bikers will never be satisfied with this attack on our freedoms. Many bikers have called for an all-out boycott on all things Harley Davidson - bikes, gear, and all other franchises - because although we realize that Harley Davidson dealerships are independently owned and operated, however the Harley Davidson corporation grants those franchise licenses. For Harley Davidson, Incorporated, to allow the Washington DC franchise to support terrorism against Americans is unacceptable. What is certain is this franchise has definitely come under heavy criticism in the biker community.