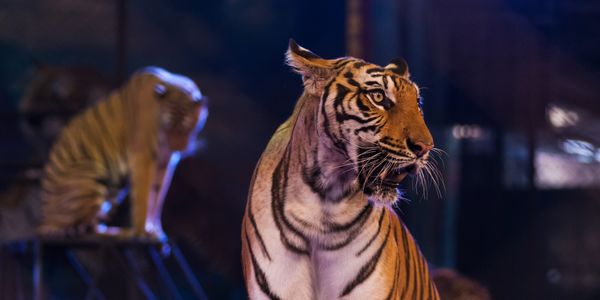 It’s time for Australia to protect exotic animals from the torture of circus life!

The modern circus as we know it was created in the 18th century by a man in England who was known for his trick horse riding. Since then, the circus has become synonymous with all types of animal performances -- from trick horse riding to lion taming to elephants balancing on balls and pedestals. But we've learned a great deal about animals since that first circus opened, and it all points to the same sad truth -- when animals are bred, raised, captured, imprisoned, and trained for the sole purpose of human entertainment and profit, they suffer. That's why it's so exciting that Wales, the final country within the UK that previously still allowed exotic animals in circuses, has finally passed legislation banning the distressing practice!

But there are still so many countries that continue to allow exotic animals to be used and abused in circuses. While many regions and cities have localized laws on the matter, that's just not enough. We need entire nations to ban these circuses, and the best way to do that is by asking powerful countries to set a precedent.

That's why we are asking Australia, a massive country with some of the richest biodiversity in the world, to stand up for animals and pass a federal ban on the presence of exotic animals in circuses. Sign the petition to show your support!

Circus animals lead miserable lives. It's such a consistent fact that it almost seems like a rule. Caged and carted like cargo, they are forced to perform tricks that are such a spectacle because they simply would never happen in the wild. A lion jumping through a flaming hoop may look cool, but imagine what is going through that animal's mind? The only way a lion would encounter fire in the wild would be during a time of intense danger. An elephant balancing on a ball may strike us as skilled, but what about the hours of beatings, whippings, and abuse that were used to force it to accomplish such an unnatural move?

History has told us, time and time again, that these animals grow depressed, lethargic, or even aggressive because of the torment they endure. Deprived of proper social and physical needs, some even try to escape. But as we've seen in France, Germany, and countless other countries, animals that make a dash for freedom are gunned down before they get far.

Australia in particular should know the value of caring for and protecting exotic animals. Over 80% of the country's animal life is unique to the continent, and can't be found anywhere else on the earth. That's what makes it even more deplorable that the federal government there has allowed rare and often endangered animals to be caged and dragged about in circuses, exploited and never able to live the lives they deserve -- which is in their natural habitat among their own species.

Lions, tigers, and elephants, native to African and Asian countries but commonly found in circuses all over the world, are quickly disappearing. And it's mostly our fault: their populations have been ravaged by human development, poaching, and trophy hunting. Our priority should not be imprisoning them so we can get a closer look. It should be conserving their populations and giving them the respect such iconic creatures deserve.

It's time that Australia joined Wales on the right side of history. Sign the petition and demand that Australia pass a federal ban on the use of exotic animals in circuses!

Care2
It’s time for Australia to protect exotic animals from the torture of circus life!
SHARETWEET