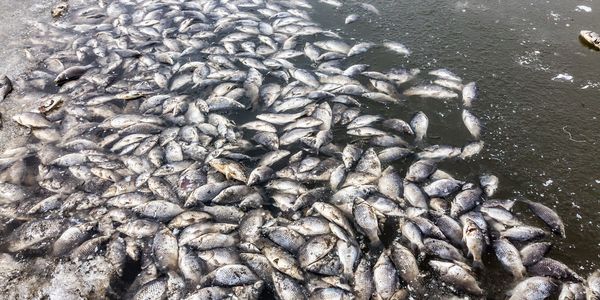 Tons of Fish Were Poisoned in This Polish River. Why Didn’t the Government Act Sooner?

Huge amounts of chemical waste were likely dumped into the Oder River, which runs through Germany and Poland, killing tons of fish and prompting an "ecological disaster." To make matters worse, the Polish government has known about the contamination since July, but are only acting now. The German environment ministry said Poland only just alerted them to the disaster -- weeks after the masses of dead fish first appeared.

Demand Polish authorities thoroughly investigate the delayed response to this environmental disaster, and clean up this dangerous pollution immediately!

The chemical spill was likely intentional, but authorities have no idea who did it or how it happened. So far, over 10 tons of dead fish have been removed from the river, and that number is growing by the day.

"The extent of the fish die-off is shocking. This is a blow to the Oder as a waterway of great ecological value, from which it will presumably not recover for a long time," said Alex Vogel, the environment minister for Germany's Brandenburg state, where the Oder River runs.

The Polish Prime Minister, Mateusz Morawiecki, said the chemical waste caused environmental damage so severe it will take years for the waterway to recover. So, why didn't the Polish government act sooner? According to local sources, "fishermen say they have been hauling dead fish and beavers out of the water for weeks." Morawiecki said two Polish officials were dismissed due to the "sluggish" government response, but two people aren't to blame when the disaster was already well-known.

Demand the Polish government thoroughly investigate the delayed response to this environmental disaster!

Care2
Tons of Fish Were Poisoned in This Polish River. Why Didn’t the Government Act Sooner?
SHARETWEET