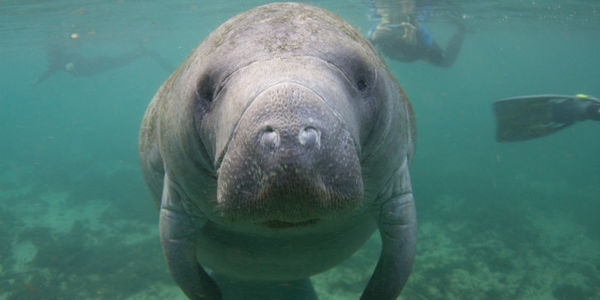 Manatees Are Starving to Death, but Florida Politicians Want to Keep Selling Them Out

Starvation is killing off the popular and adorable Florida manatees. Relatives of their land cousins the elephants, these so-called "sea cows" supposedly inspired stories about mermaids. But like their mythical counterparts, soon, these marine mammals might only live on in our imaginations.

Just last year alone, officials recorded upwards of 1,100 dead Florida manatees -- more than ever before. And in just January and February of this year, more than 300 manatees have been recorded dead. Before these epic die-offs even began, the manatees were already officially listed as "Threatened" under the Endangered Species Act

This record die-off is not only unusual -- it's also heartbreakingly avoidable. Pollution, climate change, and human development have wreaked havoc on the manatees' food sources, namely seagrass. As a result, these goofy, bejowled, algae-covered creatures of the sea have struggled in anguish, their bellies full of the pain of starvation. Civilians, nonprofits, and even the largest electric utility company in Florida have been scrambling to help the manatees and provide them with food before it's too late. Because they know the manatees are running out of time.

Now, a major effort to save these marine mammals is underway. But it won't succeed on its own. The U.S. Environmental Protection Agency must step in now to save Florida manatees from total extinction!

As part of the manatee conservation efforts, Florida environmental organizations have gathered up more than 63,000 lbs of lettuce so far, which have been donated to the program. That lettuce is then used to feed hundreds of manatees each day (sometimes as many as 800 at a given time). But even that hasn't been enough for some individual manatees. At least 82 animals' situations are so dire, they have now been relocated to rehab centers. Florida has provided $1.2 million in state funding to treat these rehab-bound sea cows, but that funding won't save the whole, starving population. And, unfortunately, neither will donated lettuce.

As Earthjustice has pointed out, "these measures are a Band-Aid that will not stop manatees from dying." They're also not fixing the underlying problem that's causing starvation in the first place: seagrass destruction.

Even worse, some politicians in Florida are willing to let seagrass depletion get even worse. A new bill introduced in the state legislature would actually allow real estate developers to dig up seagrass -- as long as they pay up. In other words, some state lawmakers are willing to prioritize the profit margins of developers over the actual lives of animals.

Manatees' lives can't be left up to the whim of some corporate-friendly lawmakers in Florida. These marine mammals MUST be protected now, before heartless politicians sell them out by letting what's left of their food totally disappear. Sign the petition to demand the U.S. Environmental Protection Agency take action immediately!
Sign Petition
SHAREShare With FriendsTWEETEMAILEMBED
Sign Petition
See more petitions:
You have JavaScript disabled. Without it, our site might not function properly.

Care2
Manatees Are Starving to Death, but Florida Politicians Want to Keep Selling Them Out
SHARETWEET