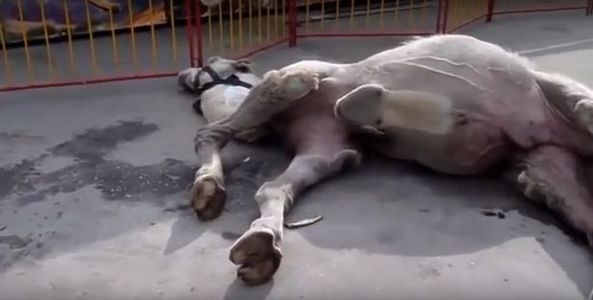 A sign outside of the Noah's Ark — a traveling zoo in Russia — proclaims "the lives of the human being and animal are equal, take care of animals."

But once you step inside of the park, a completely different philosophy looks like it is being put into practice. One in which animals were expendable and they served only to help make humans rich.

The park, located in the city of Ryazan not too far from the Moscow, is home to over 40 different species of animals, from lions and bears to panthers, tigers, and wolves. When volunteers walked inside they were shocked by what they found. They encountered several animals crying in agony and left for dead. Animals of all different shapes and species suffering under the sweltering heat. A foal was lying on its side against the burning concrete. Camels and llamas were keeled over in pain.

But it wasn't the sight of the animals dying under the 90-degree sun that first alerted them that something was wrong. It was the disgusting stench of animal refuse that they could smell from over 350 feet away.

According to reports, Russian authorities are "investigating" the matter. But what is there to investigate? Even if the authorities prosecute the owners and the promoters of this traveling atrocity, other roadside zoos, and cruel circuses will still continue to prosper. That is unless real change is made.

Russia has a real problem with animal entertainment. There are few protections that keep bears, elephants, big cats and others out of circuses and traveling animal exhibits, and animals suffer because of it.

It's time Russia join Italy, Belgium, Austria, El Salvador, Sweden and a whole host of other national and local governments in ending the animal entertainment industry. Please sign the petition and ask President Vladimir Putin to end the use of animals in circuses and traveling zoos in Russia.

Photo Credit: East2west News
Sign Petition
SHAREShare With FriendsTWEETEMAILEMBED
Sign Petition
See more petitions:
You have JavaScript disabled. Without it, our site might not function properly.