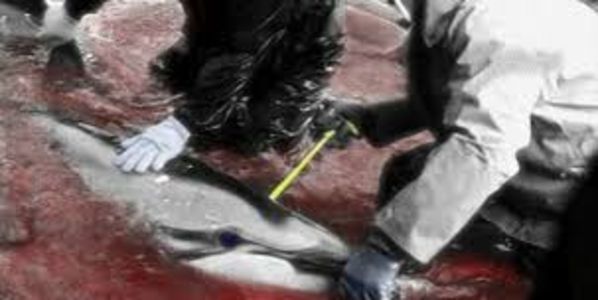 We have all watched in horror as the inhumane drive hunt in Taiji has continued through the 2013/2014 season.

The first drive hunt was in 1933 but started regularly in 1969, there is NO tradition in that. Taiji had a whaling culture not a dolphin hunt culture, there is also no tradition and culture in capturing for the Global Aquarium Industry.

Now the season has finished they will move onto harpooning out at sea resuming the drive hunt on September 1st 2014.

Please sign and share this petition let the Japanese Prime Minister know of the Worldwide condemnation of this practice and the Universal desire to get this stopped forever.

Now the 2013/2014 drive hunt season has ended in Taiji, we implore you to change the laws and make the hunting of dolphins illegal in Japan.

As you are probably aware there has been worldwide condemnation of the hunt, protests outside Japanese Embassies across the globe, Ministers and Ambassadors speaking out against the hunt, and it seems very wrong to allow 26 licenced men to bring so much disgust to the rest of the innocent Japanese people.

Many Japanese citizens are unaware, they love the dolphins as you can tell from the amount of dolphinariums in your country, they are speaking out too and also find the hunt abhorrent. Many countries across the globe are banning the keeping of dolphins and closing dolphinariums as they know the cruelty involved in keeping them captive, yet Taiji still keep supplying the others.

Please help raise the esteem of your beautiful country and bring this to an end. The people of Taiji could follow in the footsteps of the people of Futo and have a thriving tourism business which would benefit the whole of the town, not just a few, but no one wants to visit from outside your shores because of the minority killing the dolphins.

I know Abenomics is very important to you as is revitalizing Japan, so please end this senseless slaughter, there is not much call for dolphin meat in Japan anymore, those eating it are running the risk of mercury poisoning and worse radiation poisoning and the whole town could restart new businesses as many other whaling towns across the globe have had to do, which will in turn turn their fortunes around.

People are crying out for economic sanctions against Japan, they are asking the Olympic committee to withdraw your bid for 2020 and this is all brought about by a few fishermen in a small town called Taiji.

Please as Prime Minister of a great nation, bring closure to this hunt and let Japan and Shinzo Abe be held in high regard across the globe once again.

People wishing an end to the cruelty in Taiji