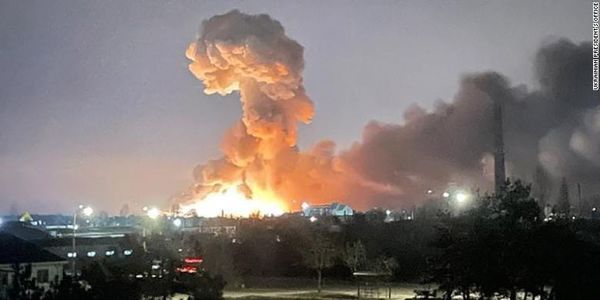 Russia Has Committed a Blatant Act of War Against Ukraine. We Stand with Ukrainians!

In the early pre-dawn hours on Thursday, February 24, Russian forces initiated multiple blatant acts of war against the sovereign nation of Ukraine.

News reports from prominent organizations have confirmed that the Russian military, under President Vladimir Putin's direction, has begun executing attacks against multiple cities around the country. Tanks and troops have also begun invading. Putin has violated international law and multiple ceasefires in pursuing these attacks and invasions.

No matter what Putin's desires are, there is no excuse to bomb people. Sign the petition to send a loud signal that you stand with Ukraine! Join Care2 in condemning this heinous act of war.

The situation is continuing to evolve, but so far we do know this is a war that Russia is initiating on multiple fronts, including military aggression, disinformation, and even cyber-attacks. Experts are calling this a "hybrid war," in that it's being fought both on the ground and online via social media and news outlets. In essence, Putin is attempting to use disinformation as a key part of his battle strategy in order to justify his unlawful violence, woo more supporters to his cause, and to make it harder for experts and civilians alike to fully grasp the reality of what's happening. The details may be maliciously -- and intentionally -- clouded, but we know enough to stand against the unambiguous Russian violence in Ukraine.

A senior U.S. defense official told CNN: "This is 100% a war of choice that [Russian President] Putin has decided to wage for reasons that are not justified." The official also clarified that, in Europe, this is the largest attack "nation state-to-nation state since World War II."

As Ukrainian Foreign Minister Dmytro Kuleba has stated, "Right now, Putin is plunging Europe into its darkest time since 1939." Experts fear huge swaths of people could be displaced, which could cause a swell in refugees seeking asylum elsewhere.

Ukrainians should not have to fear for their lives. As an international community, we must gather together to loudly oppose the Russian government's violent attacks in Ukraine. We do not support Putin waging war against an independent country. Sign the petition to speak out for humanitarian rights, justice, and for Ukraine!
Sign Petition
SHAREShare With FriendsTWEETEMAILEMBED
Sign Petition
See more petitions:
You have JavaScript disabled. Without it, our site might not function properly.

Care2
Russia Has Committed a Blatant Act of War Against Ukraine. We Stand with Ukrainians!
SHARETWEET