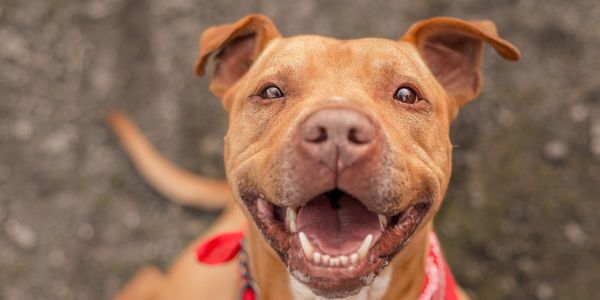 Doyle the sweet, loving dog was euthanized before he could be adopted, just because of his breed

Doyle the pitbull had a smile that would melt your heart -- the characteristic square jaw of his breed split into a grin, loose and lolling, as he ran between volunteers and employees at the SSPCA location where he was held in Lanarkshire, Scotland. He was described as adoring "every person and dog" he ever met, and the sentiment was returned -- for 58 days, staff fell more and more in love with Doyle, and hoped beyond hope that he would get a chance at a permanent home. But instead, a completely unfair, painfully generalized law in the UK actually led to Doyle being killed -- euthanized for no other reason than his breed.

Sign the petition and demand that the Dangerous Dog Act be amended in the UK!

It has been proven time and time again that the behavior, not the breed, determines a dog's adoptability and safety in a community. It's time for British law to reflect that.

American pit bulls, Japanese Tosas, Dogo Argentinos, and Fila Brasileiros are flagged in the act as being supposedly and categorically "dangerous." If a police officer -- who is trained, but not to the extent of actual animal experts -- sees enough physical characteristics in a dog that relates them to one of these specific breeds, the pup is immediately deemed a risk to public safety. Court proceedings may drag on for "months or even years" before the end finally comes, during which time animal shelters and charities care for and fall in love with these amiable, adoptable dogs. But the story almost always ends the same: in needless, indiscriminate euthanasia.

"Every time a dog comes into the centre who is deemed to be a pit bull it's the same story and it's so upsetting and distressing for the whole team." Those are the words of one of the staff members who cared for Doyle, who was killed along with 24 other pitbulls since 2013 based solely on their breed -- not their history, not a behavioral assessment, but just physical characteristics that the law has decided means the dog is a threat.

That's why the Scottish SSPCA is asking for the Dangerous Dog Act, which is far too sweeping, to be amended to allow more careful analysis of individual dogs. This way, pups that can be rehomed will have a fighting chance.

Let's be honest -- a pup's environment and responsible dog ownership are the catalysts for behavior, not breed. UK laws should focus on supporting and encouraging dog owners of all breeds to properly care for and train their dogs, instead of punishing pups that are born with certain physical characteristics.

Sign the petition and ask the Department for Environment, Food and Rural Affairs to change the Dangerous Dog Act to allow its "banned" dog breeds to be rehomed if they are suited to it!
Sign Petition
SHAREShare With FriendsTWEETEMAILEMBED
Sign Petition
See more petitions:
You have JavaScript disabled. Without it, our site might not function properly.

Care2
Doyle the sweet, loving dog was euthanized before he could be adopted, just because of his breed
SHARETWEET