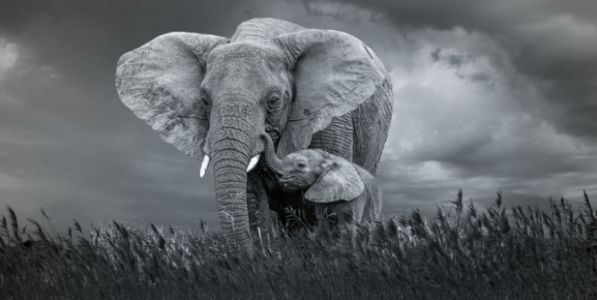 The Asian elephant, the second largest land animal in the world is undoubtedly a hearty beast. But as any conservationist knows, their size and stature don't protect them from all dangers. We know they face the daily threat of poachers, who kill them for their tusks and skin to sell in the black market. But they also face additional dangers, ones that some could never predict.

That's what happened to a family of elephants in near the town of Kamalanga, India. The herd of 15 was tragically cut in half after. The group was out searching for food when they came across a stream near a paddy field. As they walked through the area, seven of these beautiful animals came into contact with sagging 11-kilovolt power cables. Seven of the pachyderms were electrocuted instantly.

According to the Forest Department, it is the worst mass death of elephants in the area's history. And what makes it worse is that the whole thing could have been avoided. The central power company, who managed the cables, had been warned several times about the dangers of the hanging power lines yet did nothing, and now seven endangered Asian elephants have died.

Apart from their excruciating death, elephants are known to mourn their dead, for a family of elephants that lost more than half of their pack, the pain must be terrible.

Officials say some people have been suspended and others are being investigated for their responsibility in this horrible accident. But the fact remains that the power lines in the area still pose a danger to other elephants who may happen upon more hanging cables or other risks.

The central power company, apart from being held responsible, must do a review of the entire area and ensure that the rest of the elephants in the area are not in danger because of their negligence.

Please sign the petition and demand that the Orissa state and the Forest Department force the power company to do an immediate review of their lines and take precautions so that an accident like this never happens again.