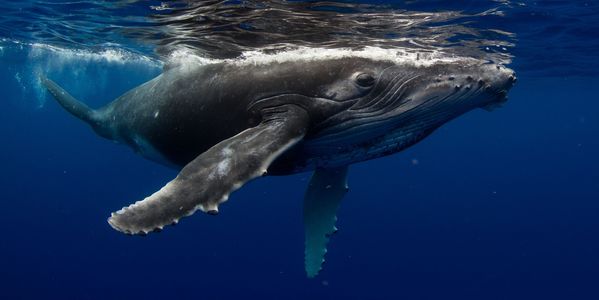 The idea behind shark nets is that they're supposed to keep humans safe. But not only are shark nets not as protective as some people might think – they're also bad for all sorts of animals, including whales!

This is becoming especially true in Queensland, Australia. In just one week during early July, three whales got tangled up in shark nets off the coast of Queensland. Meanwhile, there are other scientifically verified, humane ways to deter sharks from coming close to land. So why are authorities so determined to keep cruel, indiscriminate shark nets around?

Sign the petition to demand the Australian government regulate the use of shark nets, and require local areas to implement other, safer shark deterrent systems!

Many different types of whales live and swim in the waters around Australia. So far, humpback whales have been most traumatized and devastated by shark net entanglements. But researchers have also noticed one southern right whale and a baby calf in the area recently. Only around 3,500 southern right whales are left alive in the ocean! So if one of them were to be caught in a shark net, it could have terrible consequences.

Meanwhile, shark nets really just help us humans feel safer from sharks. Vanessa Pirotta, a wildlife scientist and researcher at Macquarie University, affirms that shark nets come with a lot of loopholes. As she has explained: "The reality … is that they don't actually cover the entire beach; the sharks can swim around and underneath them. They are outdated technology, and unfortunately there are a number of consequences to marine life." As she says, shark nets are all about "the perception of public safety."

By contrast, technologies like acoustic pingers, drones, and catch alert drumlines are much safer for both humans and other wildlife, like whales. Other states in Australia, including New South Wales and Western Australia, commonly employ these devices with good results. So why are Queensland authorities dragging their heels? It doesn't make sense.

Safer, more reliable shark detection and deterrent technologies exist. So why aren't all Australian states using them? Tell the Australian government that it's time to get rid of shark nets and employ alternative methods now!