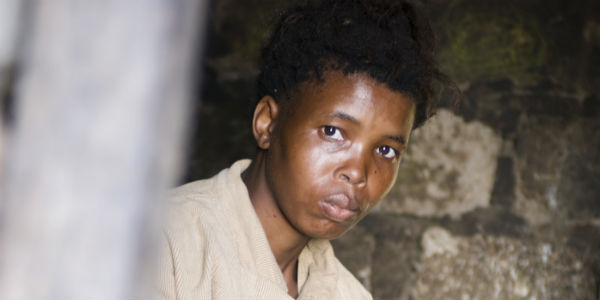 Please sign and share to demand justice for “Liz” who was raped by 16-year old! Liz is a poor young 16 year old teen who was walking home from her granddad’s funeral. She was ambushed by a group of six young men who took turns to brutally rape her and then toss her unconscious body down a deep toilet sewerage pit. Liz was able to pick at least three of the abusers out of a line up.  Of course the boys were punished – they had to mow a lawn at the police station and then let go!!!  Is this justice??!!!

The rape was so brutal that Liz now requires a wheel chair to get around.  When toss in the sewer, her back was broken.  She also has internal injuries that cause her to leak urine and stool.  She has sustained very severe injuries and the perpetrators are back out on the streets to commit the crimes all over again. The Police Commander Halima Mohamed is investigating into why the officers responded to this case as they did. When the girl was discovered by passersby and brought to her mother, police told the woman to clean up Liz “so that the vital forensic evidence would be destroyed” and not used against the suspects!  This is indeed very shocking and unbelievable.

People of Kenya are outraged because these kids and the police who seemed to condone their actions have yet to be brought to justice. The police failed this young girl as they have many other similar cases.  Because of the lack of Kenya laws deterring sexual assault and punishing the abusers, the acts continue on a regular basis.

Reports are that rapes have escalated to about 338 rapes this year compared to the same time in 2011 where there were 297 reported cases and 232 incidents in 2012. The numbers are estimated to be much, much higher because many situations go unreported. Raped children are 78 percent of those incidents. As long as there are no repercussions for the rapes by these abusers, it will not cease.  Officials and Kenya’s Coalition on Violence Against women are working to change the laws; get laws enacted against such abuse and find justice for victims like “Liz” who will never have a normal life again!  On top of it, she is also denied justice!

The National Media Group offered to cover Liz’s medical bills and launched a campaign to get the attackers and abusers prosecuted. Let us all alert the government of Kenya to stop the brutality on women and make the abusers and the inappropriate officers accountable for their actions!  Until they do, nothing is going to change to protect the women and children of Kenya.  Let’s all work together to ensure justice is done and that Liz’s nightmare marks a turning-point in Kenya’s rape epidemic. Nobody has been brought to justice -- not the rapists, and not the police. Today, we change that. Let's stand with Liz right now, before her attackers and the police escape. Please sign and share to demand justice for “Liz” who was raped by 16-year old!

Government Officials of Kenya – How can you just turn a blind eye to the abuse and rape of all women and children in your country?  What is wrong with your laws and those officers that are supposed to protect victims and subjects of abuse and cruelty?  What happened to Liz and so many other women and children like her is devastating and she will never live a normal life again.  It was more than rape but brutality and the abusers never were punished to the full extent of the law.  You need stricter laws that will punish these guys and stop the brutality and rapes; otherwise, there is no justice and safety for all the women and children of Kenya.  We need justice for Liz and other rape victims like her plus punishment of the officers who fail them and your Government lacking in proper laws!!!!