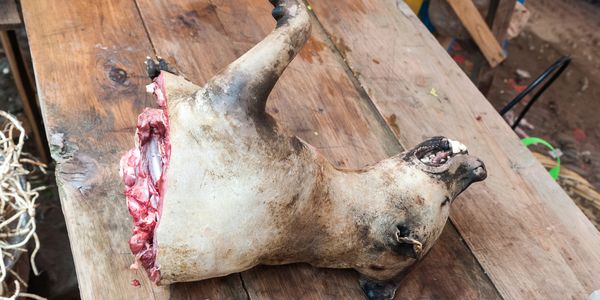 China Could Finally End the Cruel Tradition of Slaughtering Dogs for Meat!

In a move that has animal advocates stunned but hopeful, China is poised to pass a law that would make the slaughter and consumption of dogs illegal. Up until now, dogs have been classified as livestock in China, even though many of the country's citizens see them as companions and family members. As livestock, they could be farmed for meat and fur, and have been killed en masse every year in a 10-day bloody event called the Yulin Dog Meat Festival. But now, China's Ministry of Agriculture has released a draft list of acceptable livestock, from which dogs are mercifully excluded.

Please sign the petition and keep the pressure on! Let China's Ministry of Agricultural and Rural Affairs know that dogs are NOT livestock!

For years, animal welfare groups have documented the horrors that the pooches in the dog meat industry endure. They are often kept in cages so small that they cannot stand or breathe. At the infamous Dog Meat Festival in Yulin, dogs are boiled or blowtorched to remove any fur while they are still alive. The theory that adrenaline makes their meat taste better means that dogs are tortured and antagonized to the point of delirium. Still more horrifying yet are the reports that many of the dogs at the festival have been spotted wearing collars -- proof that beloved pets were stolen from their loving homes and shipped off to slaughter.

But this new law would put an end to all that. The proposal seems to be in direct response to the coronavirus pandemic, which is thought to have started in a traditional wet market in the city of Wuhan, China, where animals of various species -- including dogs -- are kept alive in cramped, filthy conditions and are killed in front of customers. The lack of hygiene plus the unnatural proximity of so many different types of animals, which would never interact in the wild, is described by health experts as the perfect breeding ground for disease.

It is estimated that a staggering 10 million dogs are killed for their meat or fur in China every year. But thankfully, labeling dogs as furry family members, and protecting them as such, may soon become the mainstream thanks to the new law. The Ministry of Agriculture went so far as to release a statement, saying "dogs have been specialised to become companion animals," and would therefore take that position in Chinese society. The country has historically lagged behind international standards when it comes to animal protections, so this leap would be a huge win for animal welfare globally!

But the law has not yet been passed. If we want to finally secure the safety of China's dogs, we need to make our voices heard. Sign the petition and urge the Ministry of Agriculture to officially reclassify dogs as companion animals and not livestock!
Sign Petition
SHAREShare With FriendsTWEETEMAILEMBED
Sign Petition
See more petitions:
You have JavaScript disabled. Without it, our site might not function properly.