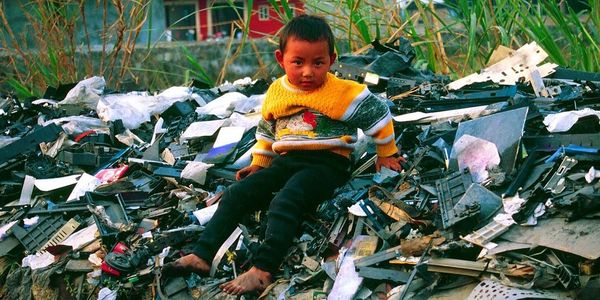 Your Old Cell Phone is Probably Poisoning Children and Animals in Developing Countries!

These days, getting a new phone can be as routine as going to the dentist or doing your taxes. It's estimated that smartphone users in the United States replace their device roughly every two years, with personal computers not far behind, lasting in their homes between three and five years. Planned obsolescence is the policy behind a lot of tech production, and it essentially ensures that phones, computers, or other personal technology have no longevity and therefore become antiquated just in time for a newer model to come out. This policy was developed for the benefit of these massive tech companies, plus the consumers who have the privilege to be able to buy the newest, coolest thing.

Where do those old, outdated devices go? Because of inconsistent legislation, a lack of research into e-waste recycling, and of course the laziness and greed of those in power, much of the world's e-waste is shipped off to developing countries. There, the workers responsible for handling the dangerous chemicals in electronics are often children who are not only severely underpaid and exploited -- they and their communities are being poisoned by our trash!

The toxic materials found in our electronics and machinery devastate workers' bodies, and when they seep into the groundwater from either processing or improper disposal, they do the same to the surrounding animals, communities, and environment. Exposure to lead, found in large quantities in car batteries, causes kidney and brain damage. Cadmium is present in a lot of rechargeable batteries, and when a person comes in contact with it they get high fevers and muscle pain -- if they are exposed to it enough, their lungs, bones, and kidneys could be permanently damaged.

The list goes on and on, and the entire thing is magnified when children are involved. Their bodies are fragile, still developing -- they are at risk of permanent, painful damage when working with our discarded and unwanted electronics. Access to healthcare is limited, and some of these kids make as little as three dollars for a full, dangerous day of work.

And the problem doesn't stop there. Clumsy extraction and disposal methods means that these chemicals leak into groundwater, effectively poisoning any living thing within a certain radius of these sites.

The United States created 59 million tons of e-waste in 2019 alone, and while some states have legislation in place for the responsible, safe, and ethical recycling of e-waste, there is no such federal law. That means that even recyclers that claim to take into account public health and environmental concerns are quietly shipping these poisons off to developing countries, where workers in dangerous conditions are not protected by labor laws.

But there is already an act that has been proposed that could put an end to all this suffering and pollution! The Responsible Electronics Recycling Act, or RERA, is a comprehensive approach to the United States electronic recycling woes, and how they affect the entire world. Under RERA, it would be illegal to export electronic waste to developing, unprotected countries for processing. It would also require the U.S. Secretary of Energy to develop a plan to research better, safer ways to process these recyclables so humans and the environment are safe from their poisonous chemicals.

This act has already been introduced to Congress. Join us in telling our representatives to pass this piece of legislation without delay by signing the petition today!