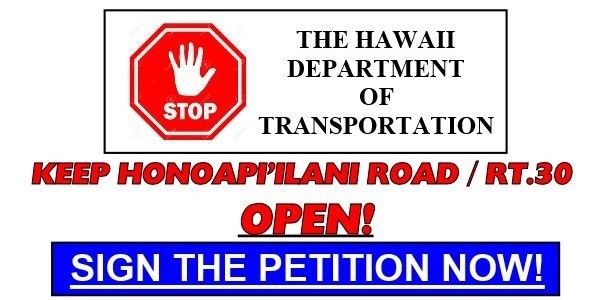 WHEREAS, THE STATE OF HAWAII DOT (DEPARTMENT OF TRANSPORTATION) IS PREPARING TO CONNECT & OPEN THE NEWEST PORTION OF THE "LAHAINA BYPASS", AT ITS SOUTHERN END;

WHEREAS, THIS NEWEST CONNECTION WILL FORCE THE FOLLOWING EVENTS:

A: The Closure of the "Rt. 30/Honoapiilani Highway" south of Launiupoko;

C: A substantial & extraordinary addition of traffic along the "Lahaina Bypass", forcing excessive amounts of traffic onto all the road connections, particularly "Lahainaluna" and "Keawe Street"';

D: The closure of what now is "two" roadways departing/entering Lahaina, down to "one" roadway, thereby, truly defeating the purpose of the "Lahaina Bypass" and its original intent;

E: Causing such severe traffic congestion, that a high number of business owners in the Keawe Street corridor and the Lahaina Industrial Park area, are convinced that great harm will be caused to their businesses. This harm will result in the loss of business, loss of jobs & reduction in tax collections;

WHEREAS, THE CURRENT CONNECTION OF THE NEWEST SOUTHERN END OF THIS BYPASS WILL NOT RESULT IN THE REMEDY OF OUR TRAFFIC CONGESTION AND PROBLEMS, BUT GREATLY INCREASE THEM AND CAUSE SEVERE IMPACT ON OUR COMMUNITY;

WHEREAS, WE THE CITIZENS OF MAUI COUNTY, THE STATE OF HAWAII AND USERS OF THE "LAHAINA BYPASS" AND "RT.30/HONOAPIILANI HIGHWAY" HEREBY DEMAND BY PETITION:

WE, FURTHER DEMAND BY PETITION THE FOLLOWING:

A: That should the Hawaii DOT fail to act upon this petition, that the Governor of Hawaii, The Honorable David Ige, issue an executive order to the Hawaii DOT demanding they "cease & desist" from this project until the items in the "DEMAND BY PETITION" are resolved;

B: That should Governor David Ige fail to act, that the Maui County Mayor, the Honorable Alan Arakawa, in conjunction with the Maui County Council, authorize a suit be filed against the State of Hawaii, Department of Transportation and other governing bodies, and attempt to seek an injunction forcing this project to stop, until the DEMAND BY PETITION and other associated issues are resolved regarding the connection of the southern terminus of the Lahaina Bypass at Rt.30/Honoapiilani Highway and the adverse affects on the Keawe Street/Lahaina Industrial Park area.