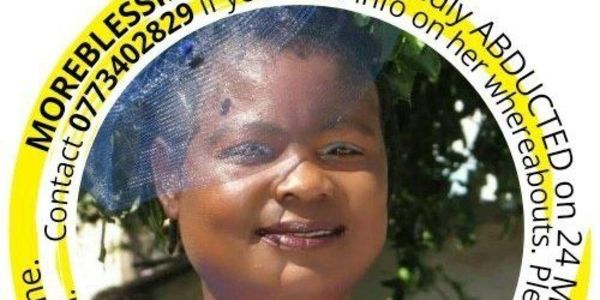 Moreblessing Ali (44 years) a member for the Citizens Coalition for Change party (CCC), was reported missing on the 24th of May. She was abducted by a member of Zanu PF the party of Mnangagwa and her mutilated body was found floating in a shallow well at well at the family homestead of known Chitungwiza Zanu PF member Simbarashe Chisango in Manyame.

After Zimbabwean citizens escalated their demand for the release of Moreblessing Ali from captivity. On June 11,2022, Moreblessing's body was found cut in peices. Her legs and arms were dismembered from the rest of the body!

Zimbabweans have been calling for justice for Moreblessing Ali but in turn the government of Zimbabwe and the ruling political party Zanu PF have unleashed a wave of violence on the Ali famlily and ordinary citizens mourning with the Family. On June 13,2022, the police through a press statement issued threats to lawyers and politicians who are demanding justice for Moreblessing!

On June 14, 2022, Job Sikhala, the lawyer representing  the  Ali family was arrested by the Police for demanding justice for Moreblessing and the immediate arrest of the known perpetrators of the henious crime committed on Moreblessing.

Citizens of Zimbabwe now fear for the life of Advocate Job Sikhala(Ali Family Lawyer) detained at Harare Central Police Station on June 14,2022. On June 15,2022, the police denied lawyers, and the family of Advocate Sikhala access to him. The situation is worrying as the police have chosen to persecute Advocate Sikhala and violate his constitutional right to legal representation!

Below is the background to the petition-:

In June 2022 concerned citizens of Zimbabwe demanded the release of Moreblessing Ali a female Political activist belonging to the Citizens Coalition for Change (CCC). Moreblessing Ali was abducted in public on May 24,2022 at a place called Chibhanguza Shopping Center, Nyatsime in Beatrice.

The Zimbabwe Republic Police (ZRP) were alerted of the abduction and the identity of the abductor, as one Pius Jamba, a well known Zanu PF member. The police did not take measures to identify and arrest the alleged perpetrator/s of the enforced disappearance.

CITIZENS NOTED with grave concern the public statement issued by the Zimbabwe Police 6 days after the abduction casting innuendos that put Moreblessing Ali's life in further extreme danger. Particularly, the police seem to suggest Moreblessing contributed to her abduction because of her alleged past relationship with the abductor and that Pius Jamba, a well-known Zanu PF member, is not affiliated with any political party. Section 51 of the Constitution of Zimbabwe guarantees everyone's inherent dignity in their private and public life, and the right to have that dignity respected and protected. Therefore, the innuendos cast by the police go against the fundamental tenets sought to be protected by the Constitution.


Moreblessing Ali is a victim of systematic enforced disappearance and a prevalent, deliberate, systematic inefficient use of the law by the government not to arrest and prosecute alleged gross human rights violators linked to the ruling party Zanu PF. To date activists such as Itai Dzamara who was abducted In March 2015 and Paul Chizuze who was abducted In February of 2012, still remain unaccounted for and the police have not provided any leads on the investigations.

GRAVE CONCERN WAS EXPRESSED about the abduction of Moreblessing Ali which the people of Zimbabwe believe to be related to her political activities and the legitimate exercise of her right to freedom of expression.

WE EXPRESSED PARTICULAR CONCERN at the physical and psychological integrity of Ms. Ali, in particular as her fate and whereabouts remained unknown until today. Additional concerns were expressed that Moreblessing was at risk of torture or other forms of ill-treatment.

WE THEREFORE DEMAND that the government of Zimbabwe, in particular, the Zimbabwe Republic Police, observes the relevant international norms and standards that are applicable to these issues brought forth by the abduction of Ms. Ali.

WE DEMAND that, the government of Zimbabwe take all necessary measures to guarantee Moreblessing Ali's right not to be deprived arbitrarily of her liberty in accordance with article 9 of the International Covenant on Civil and Political Rights (ICCPR) ratified by Zimbabwe in 1991, as well as article 9 of the Universal Declaration of Human Rights (UDHR). Section 49 of the Zimbabwe Constitution also elaborates that he every person has the right to personal liberty which includes the right not to be detained without trial.

WE ALSO DEMAND that the government of Zimbabwe observes the United Nations Declaration on the Protection of All Persons from Enforced Disappearance. In particular, the prohibition to practice, permit or tolerate enforced disappearance (article 2), the obligation to take effective legislative, administrative, judicial or other measures to prevent and terminate acts of enforced disappearance (article 3), the right to be held in an officially recognized place of detention, in conformity with national law and to be brought before a judicial authority promptly after detention and the obligation to make available accurate information on the detention of persons and their place of detention to their family, counsel or other persons with a legitimate interest (article 10).

In view of the urgency of the matter,the citizens of Zimbabwe further demanded the following, which the goverment of Zimbabwe ignored:-