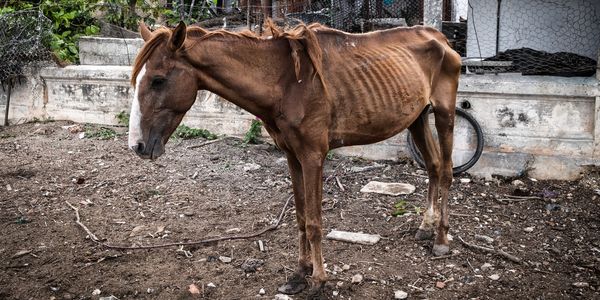 Horse Owners Were Charged With Roughly 300 Counts of Animal Abuse, But They Can Still Legally Own Animals in the Future!

In West Deer Township, Pennsylvania, a humane rescue officer was appalled to find over 40 horses suffering from extremely inhumane conditions. But, like so many states in the country, there is no law in Pennsylvania which prevents perpetrators of violence against animals -- or those who neglect their pets -- from owning animals again in the future. How are we supposed to protect animals from abuse if we continue to allow people with histories of violence to own them?

Sign the petition now to demand that these owners are never allowed to own animals again!

When the humane officer arrived on the scene after a tip from a local resident, they saw that the horses did not have access to food or water, their bones visible and poking through their skin. Not only were they nearly starving, the animals were also standing in two feet of their own feces. When police asked the accused about the conditions of the horses on their property, one of the alleged perpetrators said "We will just shoot all of the animals, then." Clearly a person this willing to kill animals so quickly instead of properly caring for them does not value their lives and should not be allowed to own any more in the future.

There are now over 600 total charges leveled in criminal court against the two accused perpetrators, ranging from neglect of animals from vet care to aggravated cruelty of animals resulting in death. Luckily, local officials were able to rescue nearly 50 animals from the property, including a miniature horse and a pig. But some horses may never fully recover from what they've suffered.

While many counties require jail time or issue fines, the most important part of an abuser's sentence is that they are not able to own any animals ever again, because it is the most effective way to prevent more harm in the future.

Sign the petition now to tell the West Deer Township Police Department to recommend that as part of their sentence, these abusers never own animals again!

Care2
Horse Owners Were Charged With Roughly 300 Counts of Animal Abuse, But They Can Still Legally Own Animals in the Future!
SHARETWEET