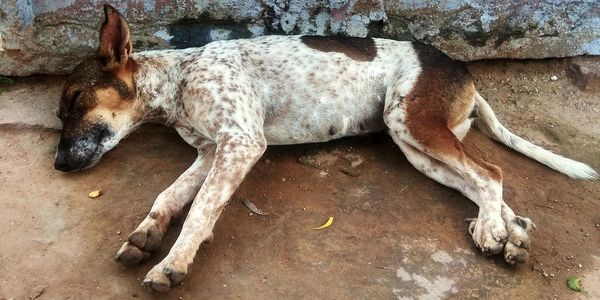 300 dogs were found dead and dumped in a mass grave. Demand a thorough investigation!

A heartbreaking scene was discovered near a lake in southern India -- the bodies of 300 dogs had been cruelly disposed of in a mass grave in the village of Lingapalem. Local animal welfare activists have reason to believe that someone individually injected each of these poor pups with poison before disposing of them so callously.

Police from Dharmajigudem, a neighboring village, have already started an investigation. But the poisonings were apparently ordered by local Lingapalem authorities themselves, so we need to make sure this investigation is thorough, accurate, and free from any corruption. Show police that the world is watching by adding your name!

These 300 dogs were actually meant to be humanely spayed or neutered, and then released. Those are India's official government guidelines on how to deal with an overpopulation of stray dogs.

But according to Challapalli charitable trust, a local organization that works on all sorts of animal issues, Lingapalem local authorities hired "animal killers" to do away with the defenseless dogs completely, breaking with official protocol -- and the law itself. India's Prevention of Cruelty to Animals Act makes it illegal to "beat, kick, torture, mutilate, administer an injurious substance, or cruelly kill an animal". But those last two points are exactly what these 300 dogs went through.

It is heartening that an investigation has already begun -- police are examining the decomposing bodies of the dogs in order to determine an official cause of death, and there is evidence to suggest that the poison that probably killed them was bought from local pharmacies. But we need to remain vigilant. If local authorities themselves informally ordered this mass animal killing, then there is no telling how deep or wide the corruption goes. Plus, many animal advocates have been saying for years that the Prevention of Cruelty to Animals Act lacks strength in its enforcement, and historically allows abusers to slip through the cracks. Now we have even more proof that this is true.

We need to make sure this horrible incident is investigated, and all those involved -- from those who ordered the killings to those who carried them out -- are held accountable. Sign the petition demanding a thorough investigation into the murders of these 300 dogs, and that charges be brought accordingly!
Sign Petition
SHAREShare With FriendsTWEETEMAILEMBED
Sign Petition
See more petitions:
You have JavaScript disabled. Without it, our site might not function properly.

Care2
300 dogs were found dead and dumped in a mass grave. Demand a thorough investigation!
SHARETWEET