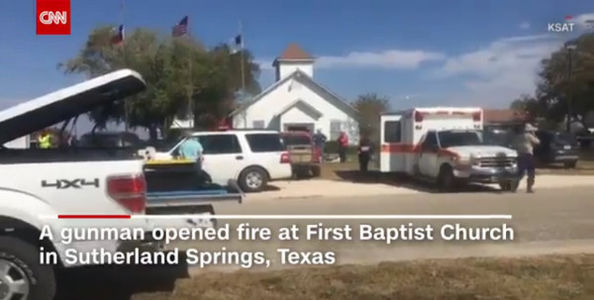 They were watching a movie in Aurora. They were learning to read in Newtown. They were celebrating in San Bernardino. They were dancing in Orlando. They were playing baseball in Alexandria. They were listening to music in Las Vegas. And they were praying in Sutherland Springs.

Then they were gunned down.

On the night of October 1st, a man unleashed a hailstorm of bullets on thousands of concert-goers at the Route 91 Harvest Festival in Las Vegas. At least 50 people were killed and over 400 injured. It is the worst mass shooting in American history.

When police were finally able to enter the shooter's Mandalay Bay hotel room, they discovered a stockpile of 10 rifles - many of which were reported to be automatic military-style assault weapons.

On November 6th, a man entered his in-laws' church in Sutherland Springs, Texas and massacred 26 people using an assault rifle. The youngest of his victims was 18 months old. It was the deadliest mass shooting in Texas history.

In the United States, it is perfectly legal to own a fully automatic weapon, including machine guns used by the military. While there are federal restrictions that limit the purchase of new military-style assault weapons, people who bought machine guns prior to 1986 just have to pay a fee and register their weapon.

According to a 2006 report, there are over 390,000 automatic military-style assault weapons registered to private owners in the United States. That means on our streets right now there is one machine gun for every thousand people living in the US... that we know of.

An assault weapons ban, which would have included the gun used in the Sutherland Springs attack, was in place for 10 years in the United States before Congress let it expire in 2004. In the 12 years since the NRA stopped the ban from being reauthorized, the death toll has spiked significantly.

Semi-Automatic and automatic weapons are designed to kill a lot of people really quickly. That is their sole purpose. Which is why they do not belong on our streets.

How many more people have to get hurt? And how many more have to die before our country recognizes the need for gun control?

Sign this petition to demand that Congress pass legislation to keep military-style assault weapons out of the hands of private owners.