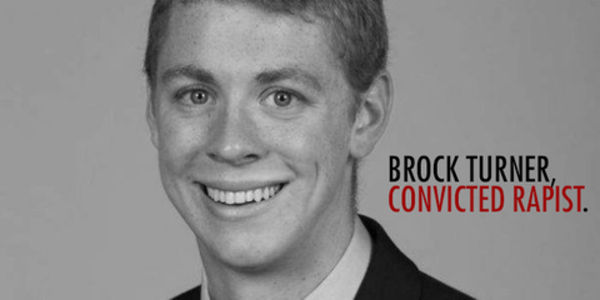 Brock Turner viciously raped an unconscious woman, behind a dumpster, near a frat party, and was only sentenced to 6 months in prison because the judge thought his deserved sentence would have a "severe impact" on him. The victim was rescued by two Swedish cyclists, and brought to a hospital covered in bruises, and scrapes. After a long trial, Turner was convicted of three felonies, and should have served fourteen years in prison. The prosecution asked for only a six-year sentence because the rape victim felt merciful. Brock will only serve six months for his brutal sexual assault.

Judge Aaron Persky sentenced Brock Turner to only six months in prison because he said, "A prison sentence would have a severe impact on him" and "I think he will not be a danger to others." Judge Persky was lenient on Brock Turner because Turner is a rich, white athlete at Stanford, who was drinking. Judge Aaron Persky is clearly biased for a dangerous convicted rapist and must be removed from his position as a result. We are asking for a recall on the Judge's seat immediately.

Judge Aaron Persky gave Brock Turner a slap on the wrist for his heinous crime because he did not want three felony convictions to ruin Turner's life. Obviously, Judge Persky's sympathy did not extend to the victim's life. She was humiliated, and violated, and will be recovering for the rest of her life because Turner raped her unconscious body.

Turner showed no remorse. He contended that his victim consented to the violation of her unconscious body behind a dumpster by a stranger.  If a convicted rapist doesn't think he did anything wrong, he is likely to rape again. Turner belongs in prison, but because of Judge Persky, he will be back on the streets in time for Christmas.

Justice was not served because Judge Persky wasn't willing to punish a convicted rapist. Judge Persky is clearly not a competent judge, and we demand the recall of his seat.

"My damage was internal, unseen, I carry it with me. You took away my worth, my privacy, my energy, my time, my safety, my intimacy, my confidence, my own voice, until today," the victim wrote.

Here is the victim's powerful letter to Brock Turner.

Sign this petition to demand Judge Aaron Persky be removed from the bench for this gross miscarriage of justice!