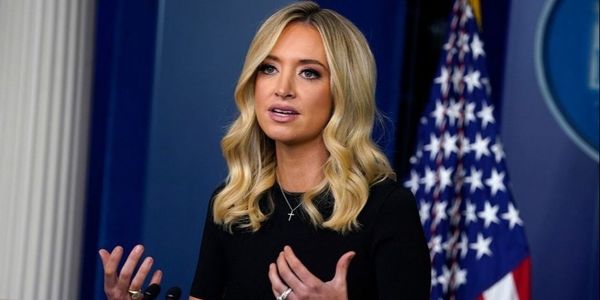 When Kayleigh McEnany first took the podium as Donald Trump's new, she told reporters, "I will never lie to you." It was an absurd laugh line that could have been written by Norman Lear.

The truth is that lying to the press is her most important job qualification, which she demonstrated by making a false defense of Brett Kavanaugh, making up a quote from FBI agents, giving verifiably false information about Trump's rape allegations, and spouting multiple lies about Michael Flynn — all in the following 15 minutes.

Let's be clear. The job of White House Press Secretary is not to lie for the president. It's to relay accurate information to the American public via the press. McEnany's disregard for the truth is not only an abdication of her responsibility, it is a danger to the American public and the systems we rely on. She must be stopped.

Since her first day, McEnany has only woven a more tangled web. She claimed that church-going reporters wanted to see churches closed, that Trump "never" lies, that Trump wasn't parroting a baseless conspiracy when he defamed the 75-year-old cancer patient who was given brain damage by police, and even that Trump was employing "very funny" satire in defense of the president tweeting a doctored video that exploited a pair of toddlers.

Trump may think this is all a game, but the consequences are serious and the lying is dangerous. Add your name to demand McEnany stop lying to the American people!