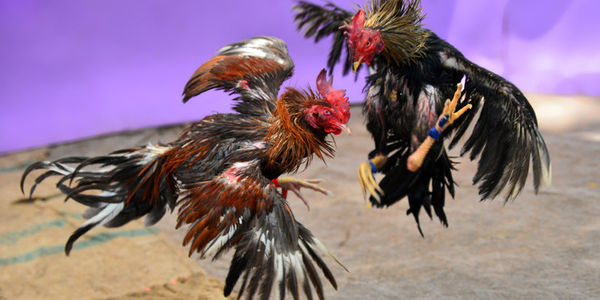 These 300 rescued cockfighting roosters are alive and well. Unfortunately, so is the cruel industry they were saved from.

The animals are about to be sent out into the ring, so their owners strap them down to prepare them for the gruesome brawl. Most of their feathers are ripped out of their bodies, to prevent other animals from grabbing onto them. Pieces of their body known as "wattles" that delicately hang down near their necks are sliced off.

And then their handlers attach the final item for battle: a razor, strapped to the animals' legs, so that they can cut and stab and slash their opponent to death.

This is what life is like for roosters bred for cockfighting, a disgusting and murder-fueled "sport."

In January 2021, more than 300 of these abused and tormented roosters were discovered at a man's home near Las Vegas, along with the death-razors that humans attach to their legs. Authorities quickly rescued all of the animals and are expected to charge the man with animal torture and animal fighting, which are crimes.

But officials also say it's hard to protect roosters and other pets and livestock from these types of offenses because U.S. animal welfare laws simply aren't strong enough on the federal level.

Police in the Las Vegas area are now urging the national government to step up and intensify legislation for animal protection — including creation of a federal crime unit that would be dedicated to helping local authorities enforce these protections.

Every moment we wait, hundreds and hundreds of more innocent, helpless creatures are being hacked to death in blood-and-scream-filled battle rings while adult humans gloat and cheer over their demise.

Tell the U.S. Congress to pass stronger animal welfare legislation, to help authorities crack down on cockfighting rings!
Sign Petition
SHAREShare With FriendsTWEETEMAILEMBED
Sign Petition
See more petitions:
You have JavaScript disabled. Without it, our site might not function properly.

Care2
These 300 rescued cockfighting roosters are alive and well. Unfortunately, so is the cruel industry they were saved from.
SHARETWEET