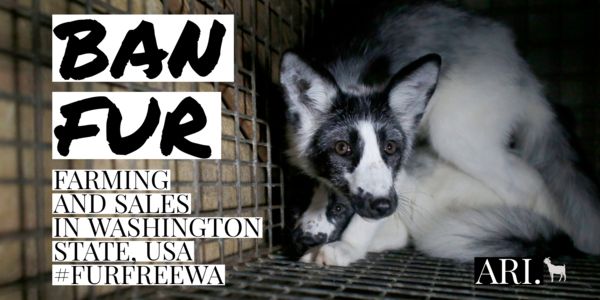 In the upcoming 2022 legislative session, two major animal rights bills will be introduced that would effectively ban fur farming and fur sales in Washington State. This petition is in support of these bills.

Farming animals for their fur is an abhorrently cruel process. Numerous scientific reports have indicated that severe animal health problems are inherent to fur production and that animals on all fur farms have been found to display physical and behavioral abnormalities, such as infected wounds, missing limbs from biting incidents, eye infections, bent feet, mouth deformities, self-mutilation, cannibalism of dead siblings or offspring, and other stress-related behavior, such as pacing along the cage wall, repetitive circling or nodding of the head. Fur harvesting methods include gassing, neck-breaking, and anal or genital electrocution—none of which reliably kill animals before they are skinned alive for their fur while still conscious, an excruciatingly painful process. Many of these methods are so cruel that they have been deemed "unacceptable" by the American Veterinary Medical Association.

Additionally, the animals' manure and the incineration of their bodies (a common method of disposal) release air pollutants, which include carbon monoxide (CO), nitrogen oxides (NOx), sulfur dioxide (SO2), hydrochloric acid (HCl), volatile organic compounds (VOCs), dioxins, particulates, and heavy metals. Nitrogen and phosphorus in factory farms' manure runoff lead to toxic algae growth in waterways, causing biodiversity loss and rendering lakes unswimmable. When algae blooms occur, it limits the amount of oxygen for other aquatic species and causes dead zones, killing indigenous species. In addition, the chemicals used to treat the fur prevent it from decomposing naturally and damage the environment. Fur is not sustainable or environmentally friendly.

Both fur production and sales are already diminishing businesses with the lowest prices fetched on average per mink pelt in 20 years ($21.90 in 2019 compared to their top-selling average in 2011, $94.30), and all but two Washington stores selling fur made from animals killed for that purpose have closed. There are currently no major department stores planning to continue to sell fur in Washington, following the recent ban by Saks 5th Avenue (which is phasing out fur by 2023) and the closure of the only Nieman Marcus in the state. The list of countries, stores, and designers that have banned fur is long and grows every day with the most recent bans coming out of the United Kingdom, California, Israel, Estonia, and from designers Balenciaga and Alexander McQueen. Fur production and sales are dying industries that support minuscule amounts of jobs, but legislative action is necessary to end this cruel industry in Washington.

The world has woken up to the cruelty of fur. Please sign this petition to be delivered to lawmakers to end this practice in Washington state!