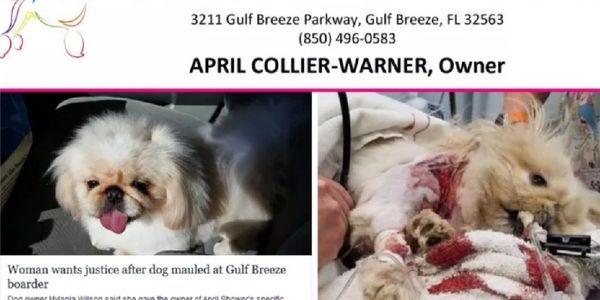 Close April Showers!! My dog was mauled to death at local dog boarder/groomer

This business needs to be closed due to negligence! She was responsible for Mimi's death! We left our 3 dogs at April Shower's dog groom/boarding in Gulf Breeze, Florida over Thanksgiving break, on November 15 - 20 2017. The owner of the boarding facility, April Collier-Warner was given specific instructions not to let Mimi around other dogs.

Before booking the reservation I gave her details on Mimi's background. I explained to April Collier-Warner that Mimi had come from an animal rescue. Her teeth were removed because she had insufficient dental care from whoever had her previously. She did not like to be roughed-around by other animals. If she felt threatened by another dog, Mimi would snap at the other animal. I told her,  it could cause another dog to snap back or even bite her. She promised me she would take good care of her. She said, "I never allow the small dogs to be placed around the larger dogs here at this facility." She promised me she would take good care of Mimi and my other two dogs.

Not only did she allow her in the back running free with the bigger dogs, she was attacked and mauled by a larger dog. Worse, April Collier-Warner claims she has no idea which dog did it or she is protecting her dogs that remain with her at the boarding facility. She had left Mimi unattended!

Mimi was released into the yard and was attacked by a large dog. She had multiple lacerations over her shoulders and dorsal neck, which included extensive muscle damage in the same regions. April Collier/Warrner, owner of April Shower's boarding and groom brought my Mimi to Animal Medical Center in Gulf Breeze Florida. Mimi arrived in respiratory arrest, unresponsive, with an extremely slow heart rate. "At one point her heart rate stopped". Said Dr. Michael Padgett, the veterinarian treating Mimi. They were trying to stabilize her before considering surgery. There was so much blood, I remember how terrified I felt for her life. Mimi started to slowly improve, to a point of sitting upright, and she started responding to people talking to her. "She knew I was her." Every time I would turn away for a split second to talk to the vet, she kept tilting her head towards me. I was petting her, trying to comfort her at the same time. As I rested my head next to hers, I thought and said a prayer to God, "Please save my baby!'. I pleaded with God to grant me this one miracle and save my little girl! About 3 hours later, I could tell she was slipping away. I remember making eye contact with Mimi's moments before she took her last breathe. Her respiratory rate steadily declined and her heart rate began to fall back into the 60's again. The vet said that Mimi was likely experiencing a bleed in the brainstem, which was leading to all her severe symptoms that keep cycling. She was starting to actively die all over again. I knew at that moment, the blank stare in her eyes, my Mimi was gone! I had no idea when I dropped her off I would never see her again! At that very moment-I lost a piece of my heart.

My dog's last few moments were horrific! Dog kennels like this one need to be shut down. Don't let this happen to your furbaby! My Mimi died 2 hours later with multiple bite wounds and internal bleeding! Florida needs stronger regulations for boarding facilities and to enforce harsher penaities. There are no laws to protect our animals from boarding incidents and it must stop!! Animal control nor the sherriff's department did not want to investigate the incident at all!!

There was a second attack!!!, Chico was attacked at the same time my Mimi was. The owner of April Showers claimed she did not see which dog attacked both Mimi and Chico. We believe her dog could be responsible! This fatility happened because she failed to watch our babies! And will happen again if she is not held accountable.

3 years ago, there was an attack on a Bichon, from another dog at her boarding facility. He suffered the same injuries. If animal control would have investigated, it could have prevented these attacks on Chico and Mimi. There should be documentation recorded on any attack/neglienge at any boarding facility! Another owner has came forward recently, regarding neglience on their dogs at April Shower's boarding facility since it has been aired in the media, all local newpapers, and channel 3 news.

We believe her facility is being operated without a business license! There are no records she ever obtained one! That is against the law!

Please spread the word everywhere! My dog's life ended because April Showers boarding/grooming did not follow directions. This business must be investigated, and closed down!