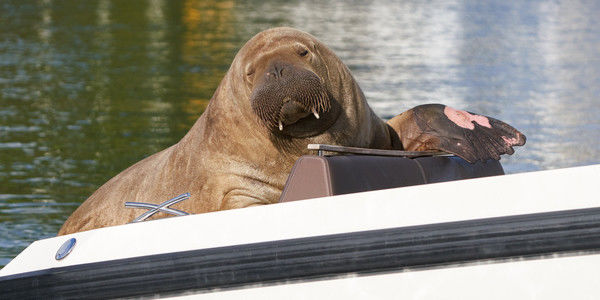 Freya the Walrus Was a Local Celebrity. Then Authorities Killed Her.

Freya the 1,300-pound walrus had become a beloved member of Norway's social scene. During the summer of 2022, she made a name for herself by peacefully sunbathing on boats and piers, lounging around just off the coastline, and generally having what social media users termed a "Hot Girl Summer."

Both locals and international tourists fell madly in love with her. A researcher named Rune Aae created a Google map to track where people had sighted Freya. A Norwegian media outlet even put together a 24-hour live camera to broadcast her sweet sleepy antics with the rest of the world!

And then, on August 14, 2022, the Norwegian Directorate of Fisheries published a shocking news release. It had killed Freya earlier that morning. Sign the petition to demand justice!

Norwegian authorities explained that they apparently had no choice but to take Freya's life, because humans refused to stay away from her. According to Nadia Jdaini, spokesperson for the Norwegian Directorate of Fisheries, "the public has disregarded the current recommendation to keep a clear distance to the walrus." It referenced occasions in which people chose to swim close to the walrus or stand nearby to take photographs.

But how was that Freya's fault, exactly? Why should she have to pay for these humans' mistakes - with her life? There was no clear sign that Freya ever had any intention of hurting anyone. Unlike other walruses, she seemed to genuinely enjoy being around people and didn't appear bothered or frightened by the attention - certainly she did not display aggressive or hostile behaviors.

On top of that, she was not likely to stick around in Norwegian waters for much longer anyway. Researchers had already observed that Freya liked to travel around between Norway, Denmark, the Netherlands, and even the United Kingdom. At one point, she hopped on top of a Dutch submarine and allowed it to escort her for part of her voyage!

Freya wasn't a danger to anyone. On the contrary - humans were dangerous to her. That's both because her many human fans had trouble staying away from her and because people are causing climate change, which is melting the area that should be her natural home.

Walruses are already vulnerable due to habitat destruction and food supply changes, due to rapidly-melting sea ice because of global warming. Walruses are not yet listed as threatened or endangered under the U.S. Endangered Species Act, but they are protected under U.S. law. In fact, many experts say walruses deserve this official designation.

As Krista van der Linde, a marine species program manager at the World Wildlife Fund, points out: "As our environment changes consistently we are going to have more and more species which are found outside of their normal range, and I believe it is our responsibility to learn to live alongside these animals and work towards better management of human wildlife conflicts." She's right! Freya is unlikely to be the last walrus in this situation. So we have to make sure human-inflicted cruelty like this never happens again.

Sign the petition to demand that the Norwegian Directorate of Fisheries create and implement a new policy to never kill innocent wildlife due to humans' inability to keep our distance. Animals should not have to bear the consequences for our thoughtless actions!
Sign Petition
SHAREShare With FriendsTWEETEMAILEMBED
Sign Petition
See more petitions:
You have JavaScript disabled. Without it, our site might not function properly.

Care2
Freya the Walrus Was a Local Celebrity. Then Authorities Killed Her.
SHARETWEET