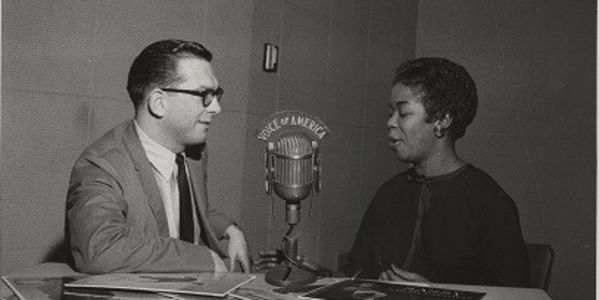 Willis Conover (1920-1996) was a producer and broadcaster on the Voice of America radio network for over forty years. His successful use of jazz to reach out to listeners behind the Iron Curtain is largely an untold story within the United States due to the Smith-Mundt Act of 1948, which forbade the VOA from broadcasting domestically. Conover's “jazz diplomacy” had such a far-reaching political and artistic impact behind the Iron Curtain that his New York Times obituary in 1996 stated: “In the long struggle between the forces of Communism and democracy, Mr. Conover, who went on the air in 1955 ... proved more effective than a fleet of B-29's.”

Over the course of a career which lasted from 1938 until his death in 1996, Conover also produced jazz concerts at the White House, the Newport Jazz Festival, and for movies and television - an enduring presence in American jazz. As a radio personality IN the 1940s, he spearheaded the integration of jazz clubs in Washington, D.C., and went on to host and meticulously select repertory for what became the first exposure to jazz for millions of international listeners. Willis Conover interviewed hundreds of jazz icons including Louis Armstrong, Benny Goodman, Duke Ellington, Sarah Vaughan, and many others. As Conover himself said, “Jazz tells more about America than any American can realize. It bespeaks vitality, strength, social mobility; it's a free music with its own discipline, but not an imposed, inhibiting discipline” (“Nation: Swinging Voice,” Time, December 9, 1966).

Clearly, Conover was an individual who made enduring contributions to the United States of America by bringing the best in American music to the world. In the 60th year since the launch of his VOA program, Music USA, and ahead of the 100th birth anniversary of Willis Conover in 2020, this is an opportune time to honor an American with a significant impact on history and culture, whose recognition is long overdue.