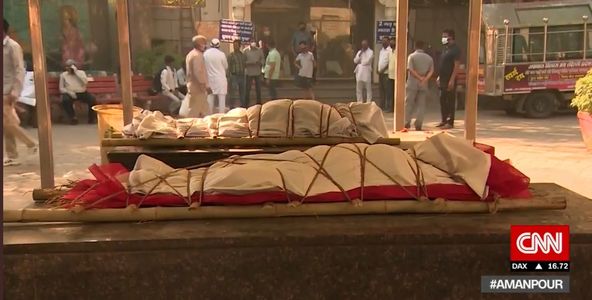 Over a year after the pandemic officially began, many are feeling hopeful for the first time in a long time -- more and more people are getting vaccinated, many countries' official guidelines are relaxing, and the global average of daily new cases is going down.

But there's one country where the news is not hopeful: India. The current COVID-19 surge in India is set to become even worse than what the country went through in 2020. On April 27, 2021, the country reported 362,902 new cases and 3,285 deaths in a single day, part of an upward trend that has been happening since March and shows no signs of slowing down.

They desperately need international aid as soon as possible. Will you sign to urge President Joe Biden to lend the United States' help?

The sick are being turned away from hospital after hospital. Those who do manage to find an open bed in an ICU are dying from simply not receiving enough oxygen, as overwhelmed hospitals have run out of basically every supply. Crematoriums are so overwhelmed by the disease's victims, some of them melting down from constant use, that mass cremations are being performed in fields filled with wooden pyres. The people in India are living through a nightmare.

The U.S. has so far promised to send "vaccine materials, drugs, test kits, ventilators and personal protective equipment." This is wonderful, and should be fulfilled without delay, but it's simply not enough. First of all, oxygen generators used by the U.S. army must be donated to the cause -- it's a basic human need, and there is nothing that can be done for patients if they can't breathe. Secondly, the U.S. officially has a surplus of vaccines, and should send as many as possible to India. Afterall, India itself has manufactured and sent tens of millions of vaccines to other countries around the world, many of which are poorer countries that need all the help they can get. India needs the help they have been so willing to provide previously.

There have also been discussions of the World Trade Organization (WTO) relaxing patent rights on COVID vaccination and treatment supplies -- South Africa and India, actually, were the countries that asked for this. Basically, with these patent rights as they are now, countries literally can't produce these lifesaving materials without fear of being sued. The United States must use its global influence and support this appeal to the WTO so that vaccine manufacturing can expand! No one should be literally dying because those in power are guarding the intellectual property of how a vaccine is made.

Those in power have an obligation to take care of their people -- and right now, those people are dying by the thousands daily in India.

The pandemic took far too many world leaders and bodies of government by surprise, even though scientists have been observing and writing about "early warning signs" of something like this on the horizon for decades. But the Indian government was quick to claim victory when their COVID-19 cases plummeted in early 2021 -- which may have led to a slow, mishandled response to its current wave, or what many are calling a wall, of cases. No matter the reason, accepting responsibility and caring for its people should be at the fore of the government's efforts -- instead, they have been asking Twitter to censor tweets expressing frustration with leadership or honestly depicting the true magnitude of the nightmare so that Indian users can't see them.

That is not a great sign that things will improve any time soon, which means it has never been more important for the U.S. to provide as much aid as possible and alleviate some of the pressure in India.

Sign the petition and demand that the United States provide supplies without delay, INCLUDING vaccines and oxygen generators! President Biden also needs to encourage the World Trade Organization to waive patent rights for the manufacture of COVID-19 vaccines and treatments so production can increase without fear of legal action.