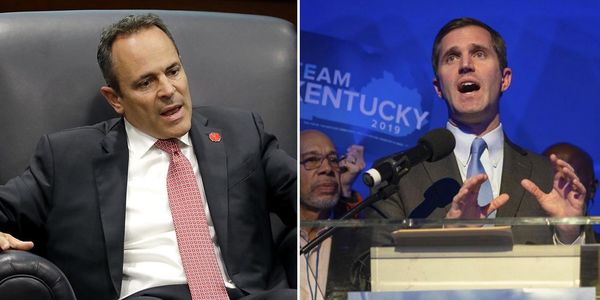 On Tuesday night, Kentucky Democrat Andy Beshear beat the nation's least popular governor, Republican Matt Bevin by more than 5100 votes. With 100% of precincts reporting, the outcome was close but clear. Beshear rightfully declared victory on election night and has begun the timely and necessary process of transition.

And yet, in an infantile move that has surprised absolutely no one, Matt Bevin has refused to acknowledge reality and concede, citing voting "irregularities" without a shred of evidence.

Bevin's list of transgressions is a long and crowded one, but refusing to acknowledge the will of Kentucky's voters and hampering the complex transition process is especially egregious. It should be noted that in 2015, Bevin eked out a primary victory for the GOP nomination by a whopping 83 votes, or approximately 0.0006%. out of 215,000 ballots cast. That didn't stop him from declaring victory in that race that night, which makes his behavior following his loss to Beshear all the more hypocritical.

Furthermore, state Republicans are floating the idea of overturning the will of the people, citing an obscure statute in the state constitution regarding "contested" elections. Kentucky Senate President Robert Stivers blithely suggested to reporters that it may come down to the state legislature – conveniently controlled by the GOP – to determine the victor.

Demand that Matt Bevin formally concede to Governor-elect Andy Beshear and insist that state GOP officials follow suit. The people of Kentucky have spoken. Andy Beshear is their new governor.