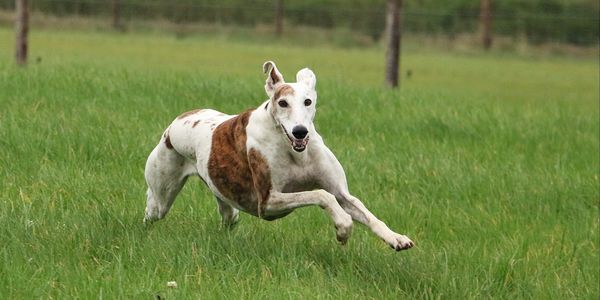 It's Still Legal to Export American Greyhounds to China — and That's Not Good.

The answer to that question might be worse than you could imagine. Animal activists have noticed that racing greyhounds, from several countries, have mysteriously ended up in China — a country where dog racing is ostensibly illegal.

First, nearly 600 Australian dogs were found at the notorious and now defunct Macau Canidrome. When the racetrack was forced to close, the dogs were all but abandoned by track owners. Then an exposé revealed that at least 40 former racing dogs from Ireland and the U.K. had been sold and exported to China over the past few years. The dogs were forced to breed constantly until finally, they were killed and sold as meat.

Sign to stop the export of American greyhounds to China.

Now, in the latest installment of "The Horrible Life of Greyhounds," watchdogs have discovered that hounds from Iowa are also making their way to China, to be raced, bred and face a whole host of cruelties. When news of the dog exports made headlines in Des Moines, it prompted both Iowa's Greyhound Association and the National Greyhound Association to change their export rules, banning the sale or expert of any registered canine to a country without accepted animal welfare standards.

This type of ban was in place in Australia as well, but it didn't stop 590 greyhounds from being sent to Macau. And a self-imposed, industry ban won't stop American breeders from sending their dogs to China either.

It is currently legal to export greyhounds to China, but that needs to change. China currently has no animal protections for pets. There is no punishment for those that mistreat them and dog and cat abuse is common. When greyhound owners sell their dogs to China, they are sending them to their deaths.

The U.S. has strong animal cruelty laws because they believe animals deserve to be treated humanely. So why is it ok to allow them to be treated otherwise by sending them to China?

The only way to ensure American dogs don't suffer when they are sold overseas is to ban their export to any and all countries with weak or nonexistent animal protections.

The government has a responsibility to protect its dogs from animal abuse whether Iowa, Alabama or abroad. Currently, that is not happening. But we can change that. Please add your name to the list and ask the U.S. government to ban the export racing dogs.
Sign Petition
SHAREShare With FriendsTWEETEMAILEMBED
Sign Petition
See more petitions:
You have JavaScript disabled. Without it, our site might not function properly.

Care2
It's Still Legal to Export American Greyhounds to China — and That's Not Good.
SHARETWEET