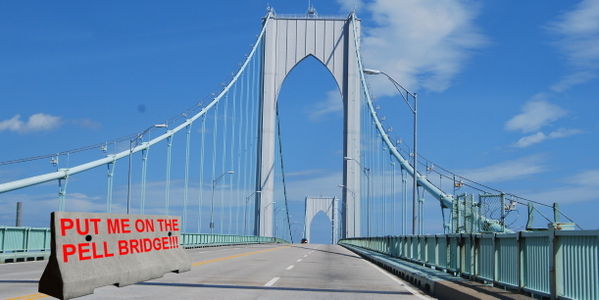 Install a median barrier on the Newport / Pell Bridge now!

URGENT UPDATE: June 11, 2014
RITBA VOTED UNANIMOUSLY to APPROVE the INSTALLATION of a MEDIAN BARRIER!!!
We're not done yet- while this is a huge step in the right direction, we won't rest until the barrier is installed and complete. Please visit our FaceBook page for the latest news: https://www.facebook.com/CitizensUnitedForBridgeSafety

On October 21, 2O11, Kenny Prior and Kathy Meunier were commuting home from work when they were killed by a distracted, reckless teen driver on Rhode Island’s Pell Bridge. A median barrier could have saved their lives.

UPDATE March 2014:
On the afternoon of December 24th, 2013, Will Oberg was driving from Newport to Jamestown when his car was hit by a truck that crossed three lanes of traffic and caused a head-on impact. The driver of the truck, Elijah Swift, died a week later from the injuries he sustained in the accident. Will, the vibrant 25-year-old victim, has endured several surgeries and hours of physical therapy in the months since the crash, and says he is thankful to be alive. He feels confident that he would have been protected by a median barrier, and is an avid supporter of the grass roots effort to install one on the bridge.

We agree with Will- and we live in dread of what seems to be inevitable - another fatal head-on collision.

The RI Turnpike and Bridge Authority knew that Pell Bridge was unsafe that fateful night in 2011, they knew it was unsafe on Christmas Eve in 2013, and they know it is unsafe now; in fact, they’ve had a barrier in their plans for years. They have issued bonds and applied for federal grants to pay for a barrier; in 2009, RITBA told the federal government that if it received a grant, it would install a barrier by June 2O11. Instead, RITBA built a brand new office building for their own personal comfort. RITBA has failed miserably to put public safety first; everyone who crosses the bridge is at risk.

More than 27,OOO vehicles cross Pell Bridge every day; industry standards mandate that a median barrier be in place when more than 20,000 vehicles use a roadway. The accident history on the bridge is compelling evidence of clear and present danger: between 1998 and 2011, there were 49 head-on crashes on the bridge, including the one that took the lives of Kathy Meunier and Kenny Prior. Simply put, RITBA has failed to fulfill its duty to protect the public from a serious road hazard. The time for delays and excuses is over.

Please join us, Citizens United for Bridge Safety, and sign this petition- demand that RITBA install a median barrier on the Newport / Pell Bridge now!